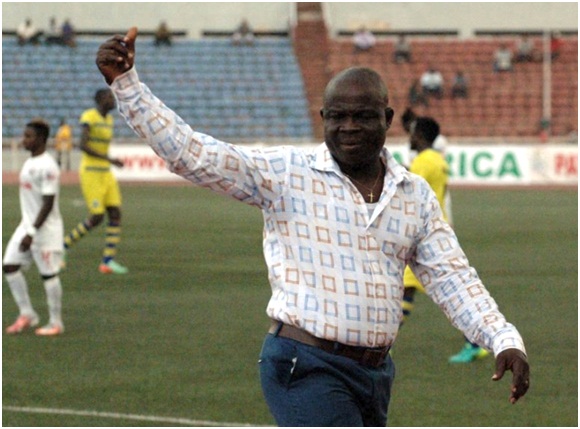 Few hours after the fans of Sunshine Stars Football Club of Akure protested the team’s poor run of form, the coach of the team, Mr Gbenga Ogunbote resigned from the team.
Ogunbote in his letter made available to newsmen stated: “I took the job in the anticipation that we will continue where we stopped the last time I coached the team with all hands pulling together to support and the team having better results.
However, on this occasion of my relationship with the team, the welfare of the team is way off the mark such that it affects morales of the players and collective motivations of the team players are my tools with my inputs to get results, results are what makes a difference in being a successful coach which unfortunately it’s not happening this time.
“I hereby appreciate all and tender my resignation with this month salary forfeited in lieu of my notice, whilst I expect all my outstanding salaries, sign-on fees and bonuses be paid in due course for proper disengagement. I wish the team all the best in the future prosecution of the league.”
The fans frustration came after the team failed to defeat their South West opponent, Mountain of Fire and Ministry Football Club (MFM) at the Ondo State Sports Complex ,Akure .
The barren draw against MFM took the team’s winless run to 15 in the ongoing 2020/21 Nigeria Professional Football League match day 23 campaign.
The presence of the Ondo State Deputy Governor, Mr Lucky Aiyedatiwa at the sporting arena was not enough for the Akure Landlords to break the deadluck.
Sunshine Stars have so far, win just four matches, drew Nine and lost 10 matches this season.
The fans demanded for the immediate sack of all the coaching including Mr Gbenga Ogunbote which they alleged to have put the team in the relegation zone.
According to them, “Sunshine Stars started well at the beginning of the season by winning away match , untill the coach started introducing the players he brought into the team without consider their forms.
“You don’t just change a winning bteam like that,” they affirmed.
“We are calling on the government to do all they could to ensure the team is not relegated, Sunshine must not relegate”.
“We are also appealing to the government to motivate the players by paying them part of their substantial part of their salaries if they can’t pay all at once, this will motivate the players to more committed and put in their best for the team, the team must rise,” they said.