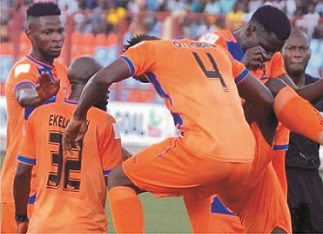 By Femi Atolagbe
|
It was celebration galore in Akure the state capital as Sunshine Stars football club downed Mountain of Fire and Miracles Ministries football club 4- 2 in the last match of the Nigeria Professional Football League (NPFL) to escape relegation.

The week 22 NPFL decided at Ondo State Sport complex saw Ekundayo Ojo  sent the home fans to wild jubilation in the 18th minute of the enthralling encounter when he converted from the spot kick.

Another opportunity came in the 25th minute as MFM was penalised in the Area for a foul on  Fuad Ekelojuoti, Dayo Ojo once again stepped in and  converted the spot kick to make it two for the Akure Landlords .

Before the Olukoya Boys pulled one back through Alade Balogun in the 31st minute of the cagey encounter.

The Olukoya Boys came out stronger in the second half by threatening the Sunshine half. MFM later reduced the deficit by scoreing another goal in the 57th minute through Akuneto Chijioke .

Before Ekundayo Ojo completed his hat- trick in 88th minute of the encounter to confirm  Sunshine Stars staying in NPFL next season.

The match ended 4-2 in favour of Sunshine Stars.

Ojo while answering questions from journalists said , the hat -trick is not important to him compared to how he was able to help his club to continue their campaign in the Elite league next season.

“We have learnt a lot this season, the mistakes we made this season will surely be corrected next season”.he said.