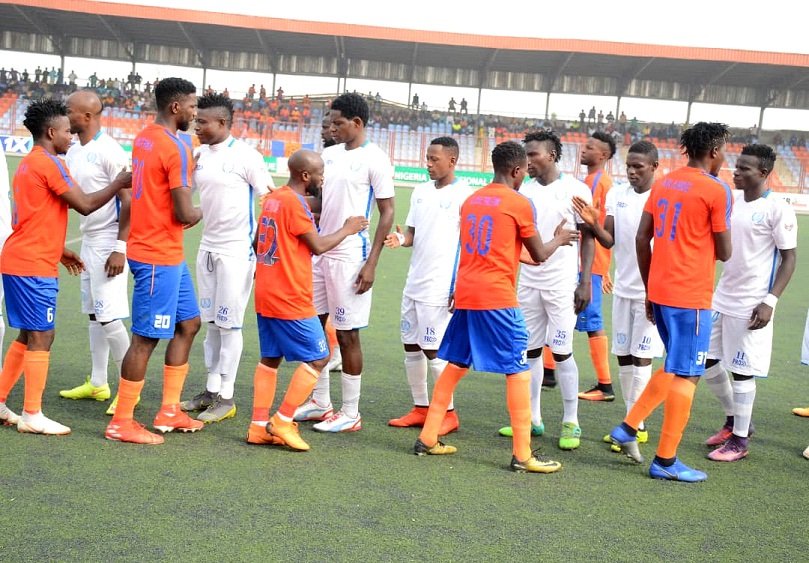 Sunshine Stars Coach, Gbenga Ogunbote has said the team will soon become a team to beat in no distant time.
Ogunbote attributed his team’s 2-2 home draw with Lobi Stars to carelessness of his players which resulted to goal in the stroke of halftime.
The coach while speaking to Journalists said Sunshine Stars had no reasons to conceded a late first half goal which brought the visitors back to the game.
According to him, “in football you pay a price for not doing the right thing at the right time, our team is a young team with young players.
“We still have our transfer plan for the team, by the time we are able to add four to five quality players into or team, then we should have a team to beat, we are still a team in the making,” he said.
He added that, “we thank God that we salvaged a point through the late freekick , which he said gave his team some kind of confidence that they can still do it.”
“The goal wasn’t a surprise to me, I knew we are going to score it, that was why I emphasized on who to take the freekick.”
His counterpart, Kabir Dogo said he was satisfied with the outcome of the cagey encounter, saying there is no different between the two teams,Ogunbote is working where I left and I’m doing same where he left.
The former Sunshine Stars gaffer, said, ” though it was a game we are suppose to win , looking at the maturity in my team and Sunshine Stars, but that is football, the most important thing is that the point I got here will serve as motivation for my team ahead of our next home match”
Fuad Ekelojuoti had put the home side ahead in the 9th minute of the encounter before they conceded an own goal to draw the visitors level on the stroke of half-time.
At the resumption of second half, several goalscoring chances were created by Sunshine Stars, but the Lobi Stars goalkeeper pulled several great saves to keep the scoreline at 1-1.
In the 77th minute however, Lobi Stars’ Ossy Martins scores to put the hosts on edge.
But Sunshine Stars drew level in the second minute of added time through Sadeeq Yusuf who utilised a rebound from a free-kick.