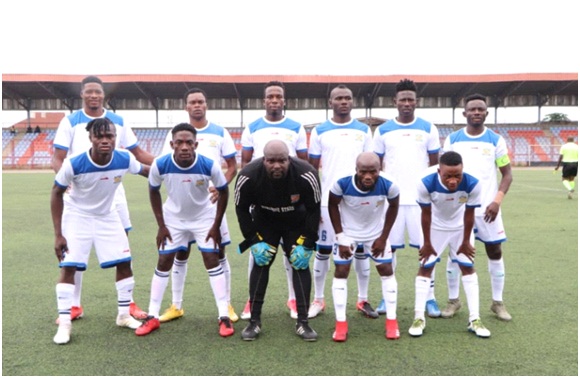 Sunshine Stars returned to winning in the NPFL with a 1-0 victory over Dakkada FC in the round 26 of the Nigeria Professional Football League (NPFL) decided at the Ondo State Sports Complex, Akure.
Centre back; Uzoechi Ejike’s goal powered the Akure Landlords to the double over the visitors from Delta state, to halt an alarming sequence of 18 games without a win in the league.
The hosts exacted their dominance on the game from the get-go but had to wait till the 38th minute to have a real crack at goal when Sunday Abe whipped in delightful ball for Sadeeq Yusuf, who saw his header kept out with a last ditch effort by the goalkeeper.
The coach Deji Ayeni tinkered side broke the goal drought in seven consecutive home games at the stroke of a hugely eventful first half when Ejike powered home a header from one of Abe’s perfectly-weighted crosses.
Sunshine Stars created further openings to add to the tally in the second period, first through Faud Ekelojuoti who slipped in the area when sent through on goal.
Akindoyin Nasiru missed out on a worldie after his bicycle flick sailed just wide 18 minutes from time.
The Akure landlords took hold of the contest in the final stages but required goalkeeper Henry Ayodele to intervene with a punching save when Dakkada heightened their failed search for a leveler.
Sunshine Stars coach, Deji Ayeni in a postmatch interview said, “I am highly elated, I want to thank God for the victory and the boys for their resilience, all Ondo State football stakeholders for their support. The win has given us some relief, but this is just the beginning.
“With this win we have gotten our confidence back, we will build on it till the end of the season. We are going to Enugu to make things happen. Sunshine Stars does not belong to the lower web of the league and we are going to bring the team back to where it belong.”
His Dakkada counterpart, Coach Umar Danlami Kwasau , said “the match was a disappointing game for his team, but we take it in a good fate, we will do better in our next match.
“We are going to work on areas we short of in this match,” he said.
Sunshine Stars next visit Enugu for a match day 27 tie with Rangers on Sunday.