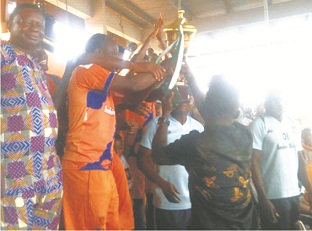 By Femi Atolagbe
|
Sunshine Stars continue their domination in the state Federation Cup after stunning Akure City 3-1 in the 2019 final.

The final match of the  FA cup played at the Ondo state sports complex ,Akure saw Ajibola Otegbeye giving Owena Whales the lead in the 30 minutes , before an Akure player Opeyemi Omoloye scored an own goal to make it two for the Sunshine Stars going to second half.

In the second half of the entertaining encounter, Akure City put their football artistry in place to mount pressure on their opponent which resulted in a goal from Ademati Kazeem in the  53 minutes.

Sunshine stars therefore showed their superiority in the 81st minute of the encounter when Anthony Omaka slot in a beautiful pass from Seun Olulayo .

Both finalists, Sunshine Stars and Akure City FC will however  represent Ondo State at the National Aiteo Cup later in the year.