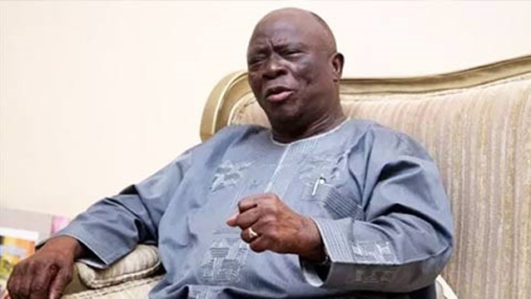 The pan Yoruba socio-political organisation, Afenifere, has urged Nigerians to disregard information from any social media account claiming to belong to its leader, Pa Ayo Adebanjo.

The National Publicity Secretary of the group, Jare Ajayi, said in a statement on Sunday that the Twitter account which some electronic and online media quoted from did not belong to Adebanjo or any  Afenifere leader.

“Whenever he has anything to say to the public, he does so directly by addressing the press, through an interview or a press statement. He also addresses the public through the Secretary General or the National Publicity Secretary of Afenifere.”

The statement added that the social media account was created by mischievous persons for nefarious objectives as could be gleaned from one of the posts purporting to explain why Adebanjo is supporting Mr. Peter Obi in the forthcoming presidential election in 2023 instead of Asiwaju Ahmed Bola Tinubu, a Yoruba man.

Ajayi quoted Adebanjo as saying that his support for Peter Obi is “more fundamental and constitutional than the reason being purported in the spurious social media account” under reference.

“In view of the fact that Adebanjo usually speaks directly with the press, both print and electronic, any information purporting to have emanated from the said ‘social media account’ should be totally disregarded because he has no such account in any form or manner,” Ajayi added.

He said, “Since the elder statesman does not have any social media account, whatever is found in the Twitter account could not be said to have come from him. He has no such accounts as he speaks directly to the media or causes his views to be channeled to the public via the organisation’s Secretary General or the national publicity secretary.

“The media and members of the public are hereby enjoined to disregard any statement purported to have been sourced from Pa Adebanjo’s social media account because he has none.”

He urged Nigerians to put aside tribal differences and vote for the right leadership.

“Ahmed Tinubu will only give continuity to Buhari’s incompetence,” Adebanjo said.

“We know Peter Obi very well, that is why we endorse him. He will not disappoint Nigerians, let us out tribal difference apart and vote right leaders.

He affirmed “I have not seen what Adebanjo said and I have not read what the youth said but what I do know is that in Afenifere, our practice is that if we have an issue,  we will all brain storm and come to a conclusion or a consensus. I am not aware this has been done.”

But in a swift reaction through a press Statement made available to newsmen in Akure, the Ondo State capital, the President of the Yoruba Youth Congress and chairman coalition of southern youth groups, Prince Dapo Adepoju said the endorsement of the labour party presidential candidate is not the stand of the majority of Afenifere leaders but a personal opinion of Mr Adebanjo.

“That endorsement is the personal opinion of Mr Adebanjo and not the stand of the majority of the Afenifere leaders.

We are not disputing the fact that Pa Adebanjo has the right to support whoever he so wish … But that shouldn’t be taken as the stand of the Afenifere.

The Yoruba Youth President later said that consultations is ongoing and in no distant time the socio political organisation will let Nigerians know who the body will be supporting for the 2023 presidential election, He later concluded that the person definitely will not be The LP candidate.

“As yoruba youths, we want to sincerely advise Baba Adebanjo to stay off political issue or endorsement that can tarnish his image or that of our Afenifere. We also want to remind Adebanjo of his inglorious roles in endorsing failed project of Dr Goodluck Jonathan in 2015.

“No serious yoruba group will betray or dump any of their sons and be supporting ‘stranger’ at this critical time that we need to be fully involved in transforming the country after President Muhammadu Buhari’s regime,” Adepoju said.