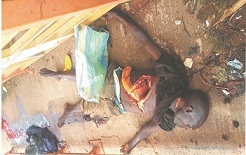 The victim, who had on him, a black shirt and short trouser, was butchered on his neck by the assailants who cleanly removed his throat and other vital organs.

When our correspondent visited the scene of the incident, the victim was seen lying  on the floor of the bus-stop,   in a pool of his blood, while his two yellow bathroom slippers were  arranged by his side, including a Bagco bag.

The Hope Metro observed that the  victim throat, liver, kidney were chopped off, while a part of his head was shaved.

Some sympathizers and passers-by who thronged the bus-stop to catch a glimpse of the gruesome  murder could not help, but wept and  rained curses on whosoever or  persons that perpetrated the  evil  act.

There was a mild confusion as to the identity of the victim, as some people claimed he was sane or a farmer, dumped at the bus-stop by the  assailants.

However, some commercial motorcyclists, who spoke with The Hope Metro under the condition of anonymity, identified the deceased as a mad man, who used to ply Oke-Ijebu-Agbogbo axis.

The Okada men who had their park beside the bus-stop described the dark in complexion victim as a popular mad man  around the  area, who always chewed stick and vibrated  whenever he was walking along the road.

“The mad man did not completely dress like somebody insane. He used to bath in a river along OKe-Ijebu. He was always  chewing stick,  they said.

Also, a resident of the Agbogbo area, while speaking with our correspondent, lamented that the area had  become  dangerous path lately, which she said  had made people afraid of  plying the road at nights for fear of being killed.

She, therefore, called on the state government to find a lasting solution to the menace.

Contacted,  the Police Command spokesperson,  Mr Femi Joseph, confirmed that the man was found lifeless around Agbogbo at about 6:30 am. As police was called immediately, and we discovered that the right side of this tummy had been ripped off while some of this internal organs were removed.

“We also noticed that his head was shaved which made us  suspect the act to be  ritual killing.

“We have taken the remains to the hospital for preservation.”

Joseph assured  that investigation to unravel the circumstances  leading to such gruesome death has commened, but he said nobody had  no body had come forward for identification.