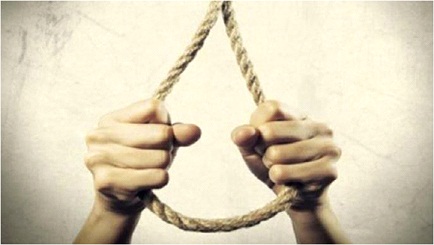 Tragedy struck in Ado-Ekiti, capital of Ekiti State, following the discovery of the decomposed body of a  30-year- old man, suspected to be a yahoo boy.

The victim, who was identified as Titus Ademiloye, was reported to have committed suicide by hanging himself  inside his rented apartment located at Odo-Ado area of the Ado-Ekiti.

The deceased was said to have climbed the roof of the house with a ladder, and hanged himself with a long rope in one of the rooms inside the house.

His decomposed body  was later discovered four days after by a young man who is said to be his friend and formerly living with him in the two bedroom flat apartment.

The development attracted other neighbourhood and a team of Amotekun corps who were on a patrol surveillance to the scene.

As of the time of filing this report, the immediate cause of the incident remained shrouded in mystery.

But a source said the incident has continued to generate controversy among residents of the area who described the deceased as a notable suspected yahoo boy in the area.

When our correspondent visited the scene of the incident, a pair of sandals and bathroom towel said to belong to the victim was found behind him on the floor close to the wooden pillar in which he tied the rope he hanged himself.

Residents of the area were seen standing in groups discussing the development in harsh tones. Other residents including members of his family who rushed to catch a glimpse of the lifeless body of the victim were seen covering their noses while crying and wailing.

Also noticed were officers of the Amotekun corps from the Ekiti State command in company of his family members  making frantic arrangement on how to remove the decomposed body for burial.

Similarly, spiritualists and traditional worshippers were seen at the corridor of the house making efforts to remove the lifeless body of the deceased, for burial in line with the traditions and culture of the people of the area.

A source close to the family of the deceased who wishes to claim anonymity disclosed that the 30-year-old man may have try to terminate his life as a result of protracted illness for which he has sold all his property, but which failed to cure.

When contacted on the matter, the Commandant, Amotekun Corps, Ekiti State, Brigadier Joe Komolafe (rtd) confirmed the receipt of the incident and disclosed that though no suicide note was found inside the room where the deceased hung himself.

He however disclosed that the body of the victim has been removed for burial, while  information concerning the incident has been forwarded to the appropriate quarters at the State Police Command headquarters in Ado-Ekiti,  capital  of Ekiti State, while investigation continues on the matter.