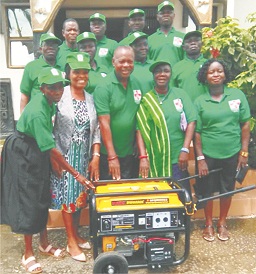 The reports of the successes and achievements recorded by the Restoration of the Dignity of Womanhood (ROTDOW) , being one of the Civil Society Organisations (CSO) working as Sub-implementing partner of  Afrihealth Optoneth Association on the Sustainable Citizen Participation project in nine Niger Delta states.

The project which was funded by United Nations Democracy Fund UDF-15-647-N/R was executed by ROTDOW in Idepe-Okitipupa area of Ondo State between 2017-2018.

1.Sustainable Citizen Participation (SCP}means that communities in Niger Delta must be able to engage with their governments on a regularly and sustained basis.

The  following were achieved in the 3rd and 4th quarters of Sustainable Citizen Participation project in Idepe Community of Okitipupa local government by ROTDOW.

* Community Entry and Advocacy: The following key stakeholders of Idepe community were successfully reached during the community entry.

The Jegun of Idepe, Oba Michael Obatuga, the traditional leader, the youth leaders, the religious leaders, the woman leader, members of the NURTW.

*Town hall meeting comprising of 50 members of the community was held on October 10, 2017 and had in attendance primary and secondary key stakeholders among who were the Jegun of Idepe, Oba Micheal Obatugba, represented by High Chief Sanumi Secretary to the King, prominent chiefs, market women led by Iya Oloja of Idepe community, Chief Mrs. Dorcas Alaledoye, religious leaders, representatives from the local government, artisans and members of the NURTW.

Three key projects were suggested by the participants. They are;

Building of the King’s Palace, skill acquisition and empowerment for youths, and roads to allow for easy passage of farm produce to the community.

The house agreed that the twenty (20) CCC inaugurated will decide on the selection of the final project to be executed in the cause of the project.

Projects selected to be implemented to achieve the objectives are:

On Thursday 9th November, 2017 there was a CCC meeting. The CEO of the Restoration Of The Dignity Of Womanhood (ROTDOW) with the Executive of the CCC, representative of Oba of Idepe High Chief Sarumi  and the major stakeholders that showed interest in the project  visited the Chairperson of Okitipupa LGA to present the action plan for the project.

A crowd funding of N100 per head will be launched.

A bank account will be opened with respect to the above suggestion with three persons as signatories constituting two CCC members and the Okitipupa Local Govt chairperson.

Objectives: To give report of activities of the launching of king’s palace, to set up committee to purchase the generator for the town hall.

OUTCOME OF THE MEETING

The six executives were elected with three men, and three women, they were people to be reckoned with in the community.

They all agreed on Oba’s Palace Project.

The launching of the crowd funding for the first phase of the project was discussed at the CCC Meeting at length and the following plans were concluded.

The following committees were set up to handle various assignments:

In February 17,2017 there was launching of the building of the king’s palace and the generator for the town hall. The programme was put up by the CCC.

The sons and daughters of Idepe Okitipupa graced the occasion.

On the 23rd June 2018, the CCC held a meeting to deliberate on donations of the launching.

The CCC met after the meeting and they agreed to open a bank account. The bank mandated the CCC to register as a group before they could be allowed to open an account and also the Chairperson of Okitipupa Local Govt, Hon Mrs Morenike Alaka also encouraged the registration of the group in the local government for more recognition.

STRATEGY-CCC invited the chairperson of the Local Government to be one of the signatories to the account.

The CCC visited the King to intimate him on the outcome of the launching and their plans of opening account and register as a group.

OUTCOME OF THE MEETING

The meeting was held in the King’s palace, the Executives of CCC were present and the remaining members were also present.

The chairman of CCC gave the report of the launching officially to the whole house. Rev Megbon on behalf of the entire group appreciated the Executive for the good job and all the members for their cooperation.

ACHIEVEMENT: The CCC purchased Generator from the money collected during launching, it was officially presented to Kabiyesi, Oba Obatuga, the Jegun of Idepe.

The Kabiyesi appreciated Afrihealth for the laudable project, he said the Oba’s palace is a huge project and he advised the CCC to equip the Town Hall with 500 chairs and fans. He also said that Afrihealth Optonet to donate some of the chairs and fans to encourage the CCC and the Community at large.

The Chairman thanked the CCC members for their cooperation, he said as the election is approaching, they must use the opportunity to demand from the politicians.

The generator was handed over to the Oba and there was group photograph.