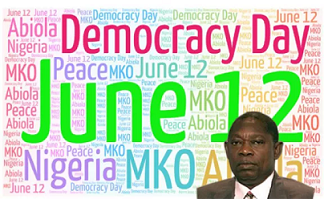 Last week, Nigeria officially celebrated June 12 as  Democracy Day. The day came about through an act of parliament and assented to by Mr President. Hope Classics correspondent, Kayode Olabanji sought views of legal practitioners on this epoch making day.

Since the bill to amend the public holiday’s act has passed through the two chambers of the National Assembly i.e., the House of Representatives and the Red Chambers- the Senate and the bill has been assented to by the President, it automatically becomes the Law of the Land as which day is democracy day.

That has been the agitation of the true democrats who are of the view that our nascent democratic system couldn’t have evolved were it not for June 12. I think the President did well in this regard no matter the sentiment attached. This would be a constant reminder to Nigerians of how the military raped the nation for a very long time before the sacrifice made by a South Western juggernaut- Chief M.K.O. who paid the ultimate price and was sacrificed for democracy.

However, making the law is one thing but realisation of the true effect of the June 12 is another. What is government doing to protect our democracy? Is our country not more divided than ever with a section of the country trying to dominate us with utmost audacity? Are our people not yet suffering immensely without getting the dividends of the long awaited democracy? Changing dates may not  be enough after all if this administration does not assiduously tackle these questions.

With the amendment of the National Public Holiday law, to accommodate June 12 and its declaration as Public Holiday, the process and the declaration is constitutional and in effect now part of our law and landmark day.

Buhari has, therefore, scored a hat trick, something his predecessors found difficult to do.

Mr. President has just acceded to the popular demands of true democrats in this country. It would be recalled that past political leaders and administrations in Nigeria shied away from the truth by not recognising June 12 as the authentic democracy day in Nigeria. It is the height of hypocrisy.

There is no gainsaying the fact that June 12 is epochal in our attempts to build a formidable democratic dispensation. It is a watershed in our political journey so far. It should be noted that June 12 is majorly remembered as a day when Nigerians irrespective of their tribes, creeds and religions expressed their sense of unity in a unanimous way for the first time in the history of Nigeria.

In spite of the Muslim/Muslim ticket of the then SDP presidential and vice presidential candidates in the persons of Chief MKO Abiola and Alhaji Babagana Kingibe Nigerians from all walks of life including Christians voted for them massively against the candidacy of Alhaji Bashir Othman Tofa of the then NRC. It was a day Nigerians demonstrated their sense of unity without fear or favour.

He has shown strong political will where past leaders had been politically timid in respect of the issue. It is a right step in a right direction.

What the president did by assenting to the Public Holiday Amendment Act translates to the fact that May 29 is no longer Democracy Day as it has been statutorily replaced with June 12.

Clearly speaking, the amendment of the Public Holiday Day Act and the renaming of the National Stadium after MKO Abiola are merely symbolic. The agitation, desires and expectation of Nigerians that partook in the struggle is still far from realised. The economic situation in the country is getting worse day by day as the poor are getting more impoverished.

More important is the fact that the purported significance of Democracy Day does not translate to better living conditions for Nigerians. Furthermore, the government of the day is yet to come to the realisation that the June 12 struggle was a national and matter not exclusive of MKO ABIOLA.

Several Nigerians fought for this struggle but are not recognized for their sincere love for this country.

By virtue of the National Public Holidays Amendment Act 2019,the President has finally signed into law,  June 12 of every year as Democracy Day and to be observed as public holiday in commemoration of June 12 as Nigeria’s authentic Democratic Public holiday, just as the 1st of October, every year as Independence Anniversary, while May 29 will be marked in every 4 transition years, as handover of power day,  and will no longer be observed as public holidays.

The basis and rational behind June 12 is MKO Abiola and being the arrow head of June 12, he deserves all commendation, it is not surprising to me the renaming of the National Stadium, Abuja as Moshood Kashimawo Olawale Abiola Stadium, Abuja. So, the naming of the Stadium after him is an everlasting immortalization of the acclaimed winner of the June 12, 1993 Presidential polls and it not enough, as a Federal University,  should still  be added to his honours for the supreme price he paid, and his wife, as well as others like Alfred Rewane, Bagauda Kaltho etc, and all those who lost their lives and others  dead or still alive in the actualization of June 12 mandate, others should received national awards, just as GCFR conferred on Abiola, so others should be honoured both post humours and alive.

We hope the recognition of June 12 as Democracy Day and some of its faithfuls will send a positive message to the whole world and for the Buhari government to recognise the need to do the needful for a renewed hope in the country and raise the standards of governance in line with the principles, philosophies and aspirations of June 12 and Abiola, for a better society and improvement in infrastructures.

The fact is Nigeria remains a pariah state in the comity of nations. Our Image has now been redeemed, upon the final recognition of June 12 as symbol of our democracy after 26 years of endless struggle for its recognition and its martyrs.

The Buhari-led government should do more to better the welfare of Nigerians in line with the struggle associated with June 12.

The issue of public holiday is a matter of law, by virtue of Public Holiday Act. Mr. President has power to declare any day as a public holiday and that is exactly what he did in respect of June 12 declared as a Democracy Day.

June 12 is now Democracy Day, May 29 is handing over day. What Mr. President has done is a welcome development and is a confirmation that June 12, 1993 elections was one of the most credible, freest and fairest election we ever had. That was when the struggle for democratic governance began.

From all indications MKO Abiola championed the struggle for the nation to return to civilian governance. So, he deserved the honour reposed on him. It is to show Nigerians that his labour is not in vain. It

Is true that he was not the only one In the  struggle but we need to start from some. This honour bestowed on MKO will signal to other Nigerians the need to  emulate what MKO had done.

The amendment of the Democracy Day in Nigeria from May 29 to June 12 is a welcome development.

It establishes the fact that without June 12, as a precursor, there would not have been May 29. To me, it has really not added anything special to the lives of Nigerians until the ethics and values of June 12 are put in place.

The manifesto of June 12 ideals, policy and idea must be put in place to give value to the proper actualization of the value of June 12. Again, the fact that June 12 has been accorded its rightful place in our national polity does not equate with the obvious fact that MKO Abiola has been fully immortalized despite the naming of the National Stadium after him.

The Government should take steps further by according him all the benefits accrued to a president and the benefits posthumously delivered to the family and June 12 holiday be named after him. Only there and then will MKO Abiola be immortalized as the Hero of June and his programs and policies put to bear on the citizenry.