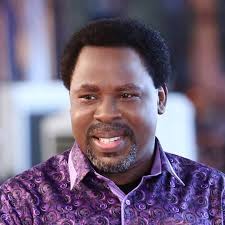 National President of Association of Christian Theologians (ACT), Professor Olakunle Macaulay, has put a lie to insinuations in a section of Pentecostal churches that the mode of worship in the Synagogue Church of All Nations is heretic.

Eighty-two-year-old Macaulay, who is also the Director of Studies at the United Bible University, Ojodu, Lagos, said having served as a cleric and a theologian for upwards of 60 years, he could confidently say that the Biblical doctrines at the SCOAN under the leadership of Prophet T.B Joshua “are sound, Biblical and without any pretention or falsification of any form.

Macaulay, who spoke during a pre-ACT National Theological Conference media chat held in Lagos, noted that it is an ungodly act to keep attacking Prophet T.B Joshua for no just or explainable cause.

“The truth must be told to some of our brothers in the Pentecostal circles that they have been attacking Pastor T.B Joshua in ignorance, and they will only do well to desist and seek forgiveness from God.

“In the first place, Jesus said that wherever his name is being preached, there shall be miracles, signs and wonders.

“These are the manifestations of the power and presence of God and it is the prerogative of God to set some people aside and endow them with powers to perform these miracles for the benefit of His congregation.

“Besides, it is unbiblical for any Christian to attack a fellow child of God over the issue of doctrine, as only God can judge both the Christians and their leaders. It is not for anybody to assume that his own doctrine is superior to the others for any reason.

“As such, the ACT sees nothing wrong in the ways Pastor T.B Joshua conducts his services, as it is not for us to judge. We teach the doctrines of Christ in our theology schools and universities, and they are not designed after the creed of any particular church, but after the Bible, which is the word of God.

“So it is not proper for anyone to condemn TB Joshua over doctrines or miracles in his church; because the Bible has asked us not to judge anybody so that we are not judged,” Macaulay cautioned.

On the reported move by the Man of God to relocate to Israel in the pursuit of the gospel, Macaulay said there was no reason why human emotions should be read into the move.

“My take is that, if God had told Pastor T.B Joshua to relocate to Israel, then he has no reason to listen to anybody begging him not to go, because this may displease God who had so directed.

“But if it is just his personal plan to change environment, then people can plead with him to stay in Nigeria because of the benefits Nigerians are deriving from his powerful ministrations,” the octogenarian appraised.

Macaulay also reiterated his stance against the interference of the National Universities Commission (NUC) with the affairs of theology-based institutions.

He said, “I have been talking about it for a long time. I will want Nigerians and the whole world to know that if the Nigerian government embraces God today, the government will have the right to control religion.

“But a nation that talks about secularity, which is an exclusion of faith, does not have the right to control faith and what it takes. The NUC is a commission of the secular government. So, religious or faith-based education cannot be controlled by the NUC.

“As a result, I will encourage producers of theological education to submit to any Commission that respects and embraces God,” he advised.

Meanwhile, Macaulay has announced that this year’s ACT National Theological Conference will hold from October 23 to 26, in Yenagoa, Bayelsa State.

According to him, the theme of this year’s edition is “The Integrity of Christianity in the Contemporary Society.”