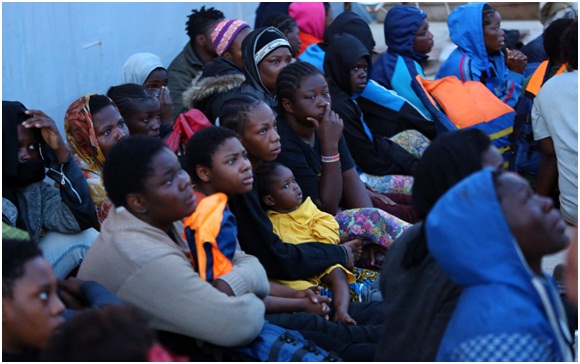 Human trafficking is gradually becoming a menace in Nigeria. Unfortunately, it has gained attention as the modern-day form of slavery that is expanding in scale with damaging repercussions on humanity and nations’ economic lives. To overcome this, all hands must be on the deck. It is a modern-day slavery that everybody must fight to a standstill.

According to Wikipedia, human trafficking in Nigeria is due to population boom and unfavourable economic conditions that aggravate unemployment, underemployment and insecurity which prompt citizens to seek for better opportunities in other countries. These opportunities include education, decent jobs and higher income. About 15 million Nigerians reside outside Nigeria, as a result of demand for access to quality education and jobs. Human trafficking remains a major challenge to the global community because it is a threat to mankind and the cause of crimes in the world at large.

The Director-General of the National Agency for the Prohibition of Trafficking in Persons (NAPTIP), Fatima Waziri-Azi, recently disclosed that over 20,000 Nigerian women and girls are currently stranded in mining areas in Mali, showing that human trafficking is still on the rise. Waziri-Azi, who made the revelation in June this year, pointed out that majority of the victims were being exploited sexually and made to live under unimaginable conditions. Apart from Mali, Nigerians are also reportedly stranded in other West African countries on account of trafficking.

Although many victims are trafficked to other parts of the world, most of them end up in Europe and Asia, with Italy as the most prominent destination. Unscrupulous persons who engage in human trafficking have made it a cartel, such that it has assumed a multi-billion dollar business. Prospective victims are lured with attractive travel proposals and foreign job offers. Parents and families are equally complicit in the racket. The growing menace can also be fueled by poverty, crime, violence, and limited work opportunities at home.

Another report from the United Nations ranked human trafficking as the second largest crime network against humanity valued at $150 billion, while the International Labour Organisation (ILO) estimated that 40.3 million victims are currently trapped in different forms of human trafficking across the globe, with Nigeria having a large pool out of this.

Over the years, NAPTIP, presently led by its Director General, Dr. Fatima Waziri-Azi,  has continued to intensify measures aimed at creating more awareness, as well as rescuing victims.

Although the Bill was passed by the National Assembly on July 7, 2003 and presidential assent given on July 14, 2003, the law which is operational throughout the country created NAPTIP as a specific multi-disciplinary crime-fighting agency and the nation’s focal institution to fight the scourge of trafficking in persons in the country, using the four pronged approach of Prevention, Protection, Prosecution and Partnership.

The Trafficking in Persons (Prohibition) Law Enforcement and Administration Act, 2003 went through an amendment in 2005, in a bid to further strengthen the agency. However, in 2015, as a result of the new trends in the crime of trafficking in persons and the need to further strengthen the institutional framework, the Act was repealed and the Trafficking in Persons (Prohibition), Enforcement and Administration Act 2015 was enacted. The new Act received presidential assent on March 26, 2015.

Reacting to this, Ayodeji Ayanleye, public health educator and psychologist, said tackling human trafficking in Nigeria could be a success only if we knew about the indicators of human trafficking.

Moving forward, he said both young and old could get such knowledge by attending human trafficking awareness trainings.

“Human trafficking has become such a serious issue that most organizations and groups across the country must include it as part of human development in their organizations.

“Once you notice any case of human trafficking or you suspect that such a thing is ongoing, never hesitate to report to the appropriate government security agencies that can handle such things. The Nigeria Police Force is one of the Organizations to inform about this act (Police are your Friend).

“You must never hesitate to become a volunteer in your community or set up a volunteer group that will be vigilant against human trafficking act. This will help to curb the menace faster, government should not be left alone to do the fighting.

“After setting up such a community awareness program against human trafficking, make sure you make the government aware of such so that they can give you required recognition and assistance when you need.”

In the same vein, a security expert who preferred anonymity said the government should beef up security at the borders leading to the routes that the traffickers use.

“Also, there should be more aggressive enlightenment of the public about the danger. Let people know that whoever promises to get them jobs abroad without proper verification is a liar and a slave master.

“Above all, there should be severe punishment for perpetrators who are caught” he added.