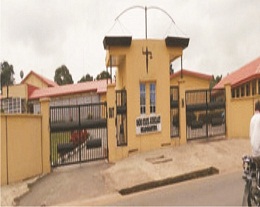 The 45-year-old accused person, who works with the Osun Internal Revenue Service in Osogbo, was said to have. committed the offence between January and July, 2019.

The prosecutor ASP Abiodun Fagboyinbo , told the court that Ogunrinde  stole the sum of N665,712.95, being property of Osun State Government.

The accused person was alleged of not issuing the Orbitwood and Allied company, the tax receipt of the amount it paid for.

But he pleaded not guilty to the two count charge of stealing and breach of peace levelled against him by the police.

The defence Counsel, Musa Abdullahi prayed the court to grant his client bail in most liberal terms.

Magistrate. Olusegun Ayilara , granted the accused person bail in the sum of N500,000 with two sureties in like sum.

He directed that one of the sureties must be a civil servant, not less than grade level 10. While the second surety must be a house owner with evidence and both must swear to an affidavit of means.

The case was adjourned till March 15, for hearing.