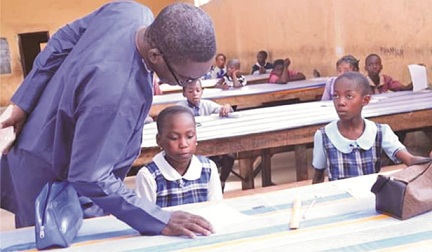 Experts in the education sector have said that teaching in mother tongue will create more problems in the sector if introduced in Nigeria.

They were reacting to the declaration by the Governor of Katsina State, Aminu Masari that students in JSS one to three should be taught in Hausa language.

According to Masari, teaching pupils at the early stage of education has scientifically proven to enhance cognitive thinking.

He added that the national policy on education was designed to teach pupils at the early stage in their mother tongue.

The experts who agreed that teaching in mother tongue has a lot of benefits, stressed that it  will be difficult to practice it in Nigeria because of multiple languages.

Speaking with The Hope on the issue, Chairman of Academic Staff Union of Secondary Schools in Ondo State, Comrade Tajudeen Balogun said teaching in mother tongue is good but it cannot work in Nigeria because of the multiple languages.

According to him, it is working in countries like Germany, Russia, China among others because they speak one language.

“It is not possible here or do we want to confine students to their environment? For example, an Ibo student who does not understand Yoruba and is in Yoruba land, how does he learn in such environment or a federal worker who can be transferred to any part of the country, how do his children access education.

“Another thing is that where will you get enough teachers to teach in that language. We are still using English to teach, we don’t have enough teachers. So government should look at it critically,” he said.

Balogun who said the issue of language is not the problem of education, noted that Nigeria can forge ahead and do better with English since we have accepted it as our lingua franca.

He also advised that more emphasis should be placed on technology for the development of education.

According to him, one of the problems in teaching and learning is inability of students to express themselves which stems from not being able to speak English very well.

“They will assimilate better if they are taught in their mother and they will be able to express themselves as you know that teaching is a two way thing because that is one of the problems we are facing, “ he stated.

He however said that the decision will create more problems since most of the textbooks are written in English adding that transition from mother tongue to English from JSS three to SS one will be difficult.

He said most children today do not even understand their language very well saying teaching in such language will compound the problem on ground.