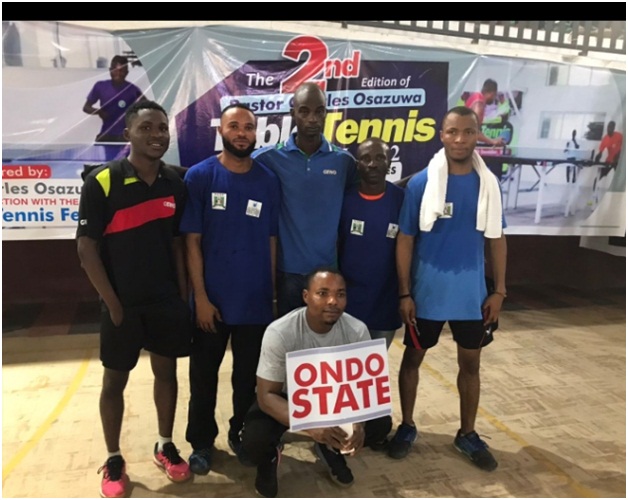 The Sunshine State Men’s team comprised Mati Taiwo,Omeh Amadi, Fagbamila Akinwale,Joshua Oladiran,Oloruntade Adeola won the most precious metal for the state in the team event which is the major event in table tennis competition.

Winning the team event showed that the feat recorded at the Edo 2021 National Sports Festival and the National Open Table Tennis (NTTF) Championship held in Lagos last year was not a fluke.

Meanwhile, two players from Ondo State played each other in the final of Men’s singles which Omeh Amadi eventually defeated his co- player,Taiwo Mati in the final to coast home a gold for the state while Mati settled for Silver.

The current feat made the Ondo State team to become the only state in Nigeria to ever win team event three times consecutively.

The state head coach, Adedotun Omoniyi in a chat with Sporting Hope thanked God  and the state government for the success recorded at the competition, saying he was happy that his team are doing well and taking the lead in the country table tennis.

He appealled to the those in charge of finance to help them accelerate the release of their fund after the Governor’s approval in order for us to get going .

He said this is sports ,where you will need money day in day out to prosecute competitions.

His words, “Taiwo Matti is from Ondo State and he is the only Nigerian player to have won medal for the country at the international competition since the creation of Nigeria Table Tennis Federation in 1951.”

“After we got the Governor’s nod and approval for his participation in the World Table Tennis Championship, we have to go and borrow money in other for us to be able to meet up with the world  event, since last year that Governor had approved the money we are yet to get the money, so that we can defray those that borrowed us”.

“What we did have never happened in the history of Nigeria that a team will win team event three time consecutively in table tennis competition, this he said has put more pressure on his team”

“Many state are now wooing my players with tempting offers for switching of allegiance,” he said.