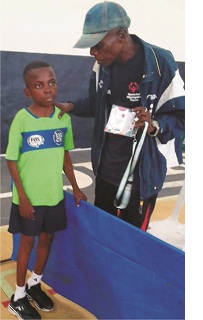 According to the letter of invitation extended to Ondo state  Para table tennis and made available to Sporting Hope.

During an interview with the Sporting Hope, Ondo State Para Table Tennis Coach, Mr Gboye Omodojo was full of confidence that his team will do the state proud at the championship.

The Coach explained that the competition will serve as a basis for selection for Edo 2020 National Sports Festival.

He said , “there is no magic in table tennis ,if you train well you will conquer, as for us in Ondo state we have been training hard even before this competition.

“I’m very sure we are going to do well at the Championship, he said.”

The coach added that “our major challenge is fund  which is not available for us, he therefore appealed to the state government and the Sports council to come to their aid financially, and the need for them to help us improve on our training equipment which we are lacking.”

According to him, we need training equipment ranging from, table tennis board, playing rubber, net and balls.

“Thanked to Oluwole Damilola who donated the ball and Net we are training with  for us as the prize of his  most valuable player of the just concluded National Youth Festival held in Ilorin.

He pleaded with the state government to carry the para players along in the scheme of things the way they are doing to their able counterpart in the state.

“The para players are having the feelings that government and the sports council are discriminating against them.”