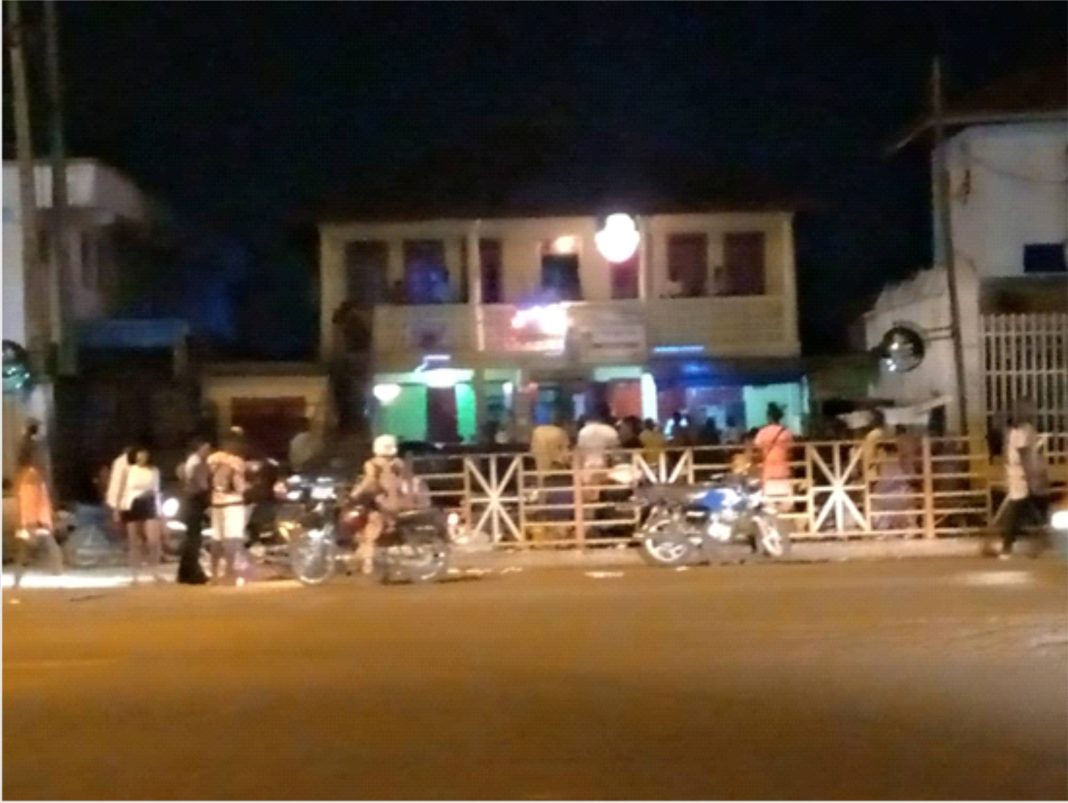 Teenage girls’ prostitution is on the increase and assuming a frightening dimension in Akure, the Ondo State capital, investigation by The Hope has revealed.
Investigation conducted by our reporters showed that the proliferation of drinking joints popularly known as ‘Abete’ in local parlance and the free circulation and abuse of drugs have encouraged the illicit trade to flourish. 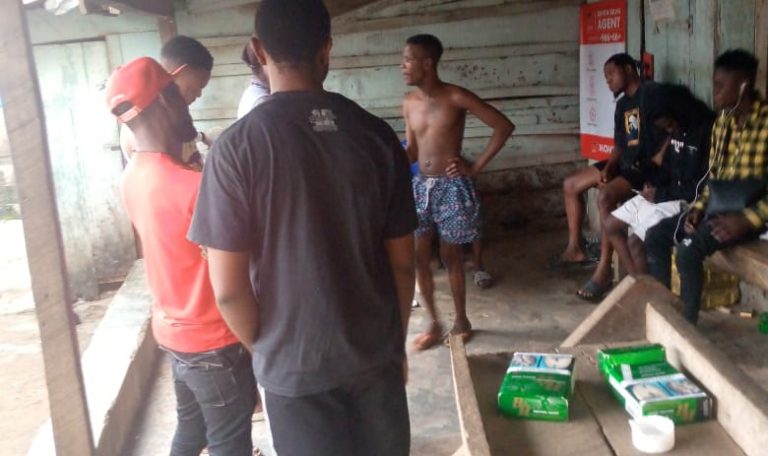 The investigation also showed that majority of the teenage sex workers are between 12 and 18 years who litter dingy lit joints puffing weeds openly wooing customers.
The joints were brimming with mainly teenage boys who conspicuously smoked weed, puff Shisha, drink alcohol and other deadly mixtures, such as “scoochies or skushis” topping the list of the most consumed substances among them.
Other deadly drugs and substances the teenagers also abuse are Rohypnol, “Ref” as they call it, “gegemu”, Arizona and Loud, believed to be enhanced Marijuana that produce stronger effect than the regular one.
“Scoochies”, with its sweet cocktail taste, contains a combination of boiled marijuana, codeine, cough syrup, Tramadol, alcohol, zobo and other mixtures the seller or producers so wish.
Places notorious for sales of these drugs in Akure, include the back of NEPA car park,Cathedral junction, Sabo at Old Garage, Idanre Garage, NEPA, Gbogi, Akure High School, Tipper Garage area and places where brothels, joints and club houses operate at night between 8pm and 12pm, especially on Wednesday, Friday and Sunday.
The ‘abete’ run by Taye, as he is called, witnesses a huge number of both young and old customers some of whom are believed to be students of secondary schools.
Without any fear of arrest or being scolded, teenagers are frequent customers of the place, smoking and gulping down the sweet scoochies packaged in 60cl bottles, wrapped in black polythene bags. 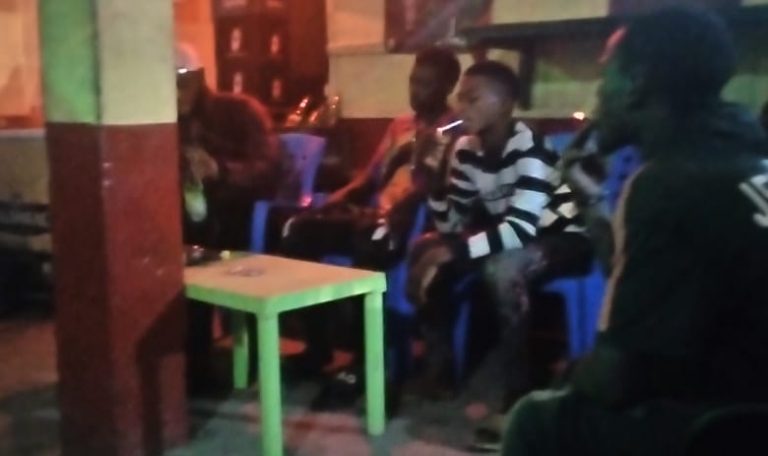 A 60cl bottle of scoochies is sold for N500 and there are three young boys between ages 15 and 17 that usually load scooshies in large quantity for those that come to buy in bulk for onward sale at other joints.
In one of the joints visited by our reporter, over 50 bottles were sold, aside those sold in bulk to others within one hour.
In Akure and several other towns in the state, scoochies is a common drink at many joints and bars, where teenagers are also usually seen smoking cigarettes and marijuana.
When asked why the heavy consumption of the drugs and substances, one of the boys said, “bros, the vibe you go get self no be for here, meaning, the sensational feeling one gets is beyond explanation.
Speaking in Yoruba, another boy said “mo le gbe Oja kin fi shashe”, meaning, I can consume these substances to have sex.
Also, some of the teenage girls told our correspondent that they took to prostitution as their main source of livelihood.
Our investigation revealed that while professional sex workers ply their trade in brothels, or stand by the road sides, the teenage girls also do their ‘runs’ discreetly beside the brothels and they can also be found at several joints, hotels, beer parlours.
The sex workers, popularly called Oloshos operate mainly at Iyeoma Plaza junction down to Signatures, Grand Capital Hotel, UBA, First Bank round-about and other areas, where they are conspicuously seen, some of the teenagers also join the queue to look for customers.
At Cathedral, the teenagers play around the area while some others sell goods, especially edibles to night crawlers in the area but they offer another “service” to those who understand the trade.
Our correspondent, who disguised as a customer, approached night crawlers on different occasions after which they agreed to have rounds of sex in exchange for a meagre payment as low as N300.
Many of them do not dress like sex workers to avoid being arrested or discovered but with the right approach and money, they easily succumb to have sex.
One of the girls, about 15 years old and a student of a secondary School in the city, agreed to be paid ‘any amount’ our correspondent could offer at a particular night.
She said that she would offer her “service” at either her house behind the brothel or at one of the dark corners but cannot follow any customer home at night due to the fear of being kidnapped or being used for ritual.
A source living in the area hinted our correspondent that one of the girls was taken away by an unknown customer and had not been seen. So, “all of Dem dey fear”, the source disclosed.
The Hope correspondent revealed that the teenage sex workers hardly offer their service to ‘boys loitering around the area, they prefer older persons.
The Hope correspondent also got a hint that some of the teenagers have cell groups in the respective schools and they are sometimes invited to House parties, for no other reason other than to offer sexual pleasures.
Corroborating our findings on the alarming rate of drug abuse among the teenagers, the Chief Medical Director, Ondo State Psychiatric Hospital, Dr Akinwumi Akinnuoye revealed that many teenagers were being brought to the facility for treatment.
“We have also noticed an ugly trend of early use of these substances, there are cases of secondary school as young as 10-16 years old students involve in this menace, with some of the most immediate devastating mind and brain-damaging effects in them.
“We see this often in our facility. We have seen this trend increasing in recent times and it’s very disturbing, he disclosed
A psychologist, Mrs Chinelo Olayimika said continuous abuse of psychoactive substances by the teenagers comes with serious negative implications on mental and physical wellbeing of the teenagers.
The mental health expert expressed great concerns on the future of the youth, saying urgent interventions were needed to safeguard the seemingly gloomy future.
Also, a health social worker, Oladimeji Ayodeji said the moral fabrics and the values system of the society had been destroyed, saying high rate of drug abuse had led to increase in organ diseases and respiratory disorder being reported among the teenagers.
The Health Project Coordinator, Rural Nurture Initiative warned that “there is now a strange burden of cardiovascular diseases among teenagers. Also, slow breathing and heavy snoring, which is traceable to respiratory disorder. Kidney failure, liver failure and the social stigma cannot be erased as well”.
He warned that if no urgent measures were put in place, many teenagers might be admitted at Psychiatric hospitals. 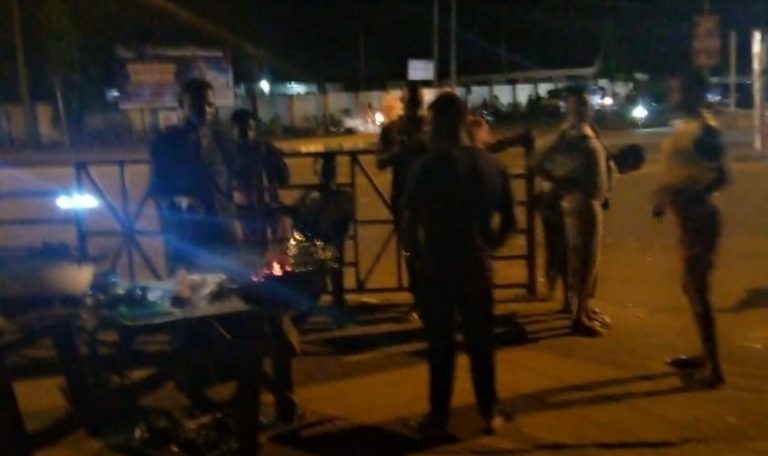 As solutions, he recommended that individuals, families, religious centres, NGOS, groups and the government must synergise to curb high rate of drug abuse and prostitution among teenagers through proper orientation.
The State Director, National Orientation Agency (NOA), Mrs Layo Adefolalu said NOA had organised several campaigns against drug abuse and prostitution, especially among the teenagers.
While noting that NOA had established “Integrity club” in schools in the state, she advised parents not to shirk their responsibilities and safeguard the future of their wards.
Islamic and Christian leaders, who spoke with The Hope, described the development as signs of end time, parental irresponsibility and failed political and economical system.