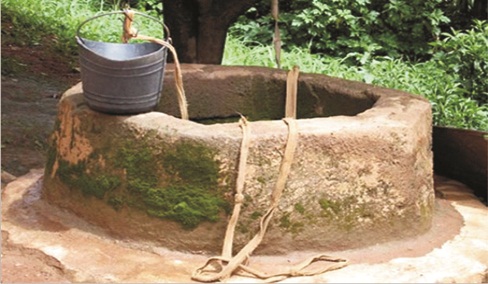 By Jubril Bada
|
Tragedy struck in Oda town in the Akure South Local Government area of Ondo State last Friday,  when  the lifeless of a  teenager was found inside a Well.

The body of the boy, simply identified as ldowu was said to be  a Senior Secondary one student of Ogbe High School, Oda.

The Hope Metro gathered that the lifeless body of the boy was found around 7:30pm inside the Well at Agbota Street, when members of his family conducted a search party to search for him

It was learnt that the boy’s corpse was discovered by a resident in the street, who noticed that the Well which was cover was opened while a pair of slippers was found beside the well.

The boy was said to have been the fourth child his father had lost out of his five children.

A resident in the neighbourhood, who spoke under the condition of anonymity with The Hope Metro, revealed that the deceased was reportedly washing his school uniform around 6pm on the fateful day at the frontage of their rented house in the town during which  he went to fetch water from the Well .

The boy, was said to have mistakenly dropped the fetcher into the Well and decided to enter the Well to pick the fetcher up.

It was learnt that the boy must  have lost control while he was trying to come out of the well because the rope of the fetcher was discovered that the rope was tied round his waist after the corpse was evacuated from the Well.

Another resident, who assisted in removing the lifeless body of the boy from the well narrated that the heat in the well was too much, suspecting that the deceased must have been killed by the heat.

He however, said there was little water, which in the well was little as this could not cause the death of the boy.

When contacted the Police Public Relations Officer, Mr Femi Joseph, said he was in a meeting and promised to reach our reporter after the meeting.