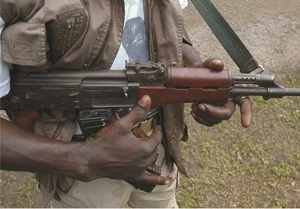 Victor Akinkuolie Ado-Ekiti
|
There was parpable tension in Ikere-Ekiti, the second largest town in Ekiti state on Sunday as unknown gunmen shot dead a middle-aged vigilante official, working with a private company in the community.

The incident which has thrown the entire town into mourning occurred at the middle of the night at a quarry located along Ikere-Iju-Akure road,  when the gun wielding bandits allegedly invaded the firm to steal some valuables.

It was learnt that about three official of the Vigilante Group Nigeria (VGN) were stationed at the quarry site to prevent stealing of some property of the company and had been stationed in the place for more than six months.

Narrating his ordeal, one of the night guards ,who craved anonymity ,but was lucky to have escaped from the scene, said the assailants who were six in numbers came at the dead of the night.

He said : “the robbers shot the leader of the team from the window while the other one was tied with rope.

“Electric cables and other facilities in the quarry were carted away by the suspected robbers”.

When contacted the Commandant of the VGN in Ekiti State, Mr. Akin Olounloni confirmed the incident ,but claimed that the vigilante was killed by some suspected cultists.

Olounloni explained that “the deceased had earlier called him to report that some cultists threatened to kill him after he reprimanded them.

“When he called me, I told him to report the case to the police in Ikere, he went there, the boys were invited and the issue was settled but only for me to receive a call that the man was killed overnight.

According to him, the suspected cultists have been arrested and are currently with the State Anti Robbery Squad(SARS).

The Police Public Relations Officer, Ekiti Command, Mr Sunday Abutu could not be reached for comment, as his mobile phone number was switched off.

However, SARS’ Commander in Ekiti, Mr Marcus Ogundola, confirmed that three suspects have been arrested in connection with the crime .

” We have arrested three suspects but investigation is still ongoing. We cannot say for now whether they were the real perpetrators, but we are thoroughly digging into the killing”, he said