The coming of on-demand motorcycle platforms in Akure 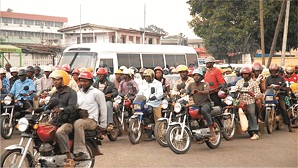 The coming of on-demand motorcycle platforms in Akure

By Adetokunbo Abiola
|
Motorcycles popularly referred to as ‘Okada’ have become a popular mode of transportation for the over three hundred thousand inhabitants of Akure, the Sunshine State capital. The reason for this is not farfetched- so many people travel to work and transact other businesses each day. Hence, there is bound to be demand for the service.

Though Okadas are loosely regulated in the city, but the use of this mode of transportation is not much different from the way it’s used in other Nigerian cities. Untrained people can start  ferrying passengers from anywhere. The bike riders may or may not use helmets, and they ride without the knowledge of traffic rules, a situation that leads to numerous accidents.

Recently, in July to be precise, things changed, as MAX.ng, Nigeria’s first on-demand motorcycle platform, launched in Akure, Ondo State, with OPay. The launch was fast-tracked by the partnership between the Ondo State Government and Max.NG, under the “SUNSHINESAFEBIKES” initiative.

Making the announcement via their Twitter account @maxdotng, the motorcycle ride-hailing taxi startup tweeted: “In a bid to provide safe, affordable and accessible transportation to one billion Africans, we are delighted to announce that MAX Okada has successfully been launched in Akure! We can’t wait to get you to your destinations safely.”

The Governor of Ondo State, Rotimi Akeredolu, in his tweet from his handle @RotimiAkeredolu said: “When Max reached out to us with their intent to launch, we promised them our utmost support under one condition; that they brand their service #SunshineSafeBikes and partner with the state in instilling a culture of safe riding. Now residents can ride safely. Ride On MAX!

MAX.ng’s expansion to Akure marks the first time the startup operates outside Lagos, and also intensifies the competition in the ride-hailing space in Nigeria, where Gokada, Opay, and Safeboda are battling one another for market dominance and share.

On-demand motorcycle platforms generally have the same aim. They want to ensure their  riders  are safe, so they carry out  weekly trainings, give riders adequate safety gear, knowledge about tech-enabled driver-behaviour tracking, intensive pre-screening, rapid-response in-house medics, and more.

And the reason for this is clear. According to Fatah Saleh, who brought Gokada to Lagos, “747 motorcycles were involved in road accidents during the fourth quarter of 2018. That’s more than one out of every five accidents.”

On-demand motor-cycle platforms say they aim to reduce the spate of motor-cycle accidents on Nigerian roads. And the truth is, the business of motorcycle ride-hailing service is perhaps the next big thing in Nigeria. And from the look of things, more players are definitely coming, which will no doubt drive down prices. If prices are relatively affordable and safety is not jeopardised, then motorcycle ride-hailing companies should be smiling to the bank. Passengers of motor-cycles will also smile, because they would be getting good service at affordable rates.

This reporter learned the entry of Uber changed the transport space in Nigeria, and the place for the traditional taxi or motor-cycle bailing business may no longer be sustainable. With the coming of Uber, people can now sit in the comfort of their offices, contact the app and a driver picks them from the office. It seems the same thing is about to happen in Akure to the Okada business.

Of course, the phenomenon didn’t start in Akure.  Metro Africa Express was founded in 2015 by two MIT Alumni, Adetayo Bamiduro and Chinedu Azodoh, while MaxOkada made its debut in July 2017. It was initially called MaxGo as in go sharp sharp.

Gokada, another on-demand motor-cycle platform, was founded in 2018 by Fahim Saleh, a Bangladeshi entrepreneur who previously founded and exited Pathao, a motorcycle, bicycle and car transportation company. Formed in February 2018, transport solution Gokada allows customers to order a motorcycle ride via its website or app. In its 14 months of operation, the startup has secured close to 1,000 bikes and completes around 5,000 rides across Lagos Mainland each day, with rides approaching one million in total. It recently secured  a US$5.3 million in Series A funding, as it plans to expand its driver fleet, increase its daily ride numbers and grow its team.

SafeBoda is another company competing in the increasingly crowded business, trying to get its share of the market, bringing its Ugandan experience to Nigeria, Africa’s largest economy. After conquering East Africa, It wants to do the same thing in Nigeria.

And then there’s Opera Software AS, best known for its mobile browser, O’Ride. Its ambition is to  become a full-fledged digital service business. It recently launched OPay, which is a seamless mobile money service and just a few days ago, it unveiled ORide. Although it is a relatively new player in the motorcycle hailing game, it sure has a wall chest to make ‘anything possible.’

How do users access on-demand motor-cycle apps? According to Kayode Olubunmi, writing in Aljazeera, “Users download an app and request rides on their smartphones, and branded motorcycles show up on demand. As an added feature, users can also hail branded bikes on the street.”

On demand motorcycle companies have been exploiting a Nigerian stipulation that says bikes with an engine capacity of greater than 200 cubic centimetres can travel on all major roads and highways. Still some of  Gokada’s bikes have been seized by government officials for other infractions.

Some Opay passengers in Akure don’t war helmeta, meaning the safety propaganda of the on-demand company is defeated.

In Akure,  it is difficult to know where on-demand motor-cycle business will catch on, but if it is catching on in other cities, then anything is possible in the Sunshine State capital.