The legislators we want 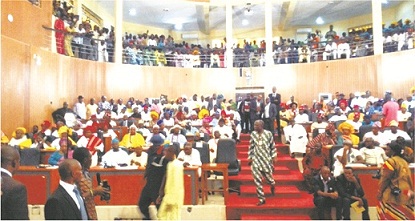 The legislators we want-

By Bisi Olominu
|
Ondo State people will on Saturday elect their legislators that will serve their interest for the next four years.

In the coming election, 325 candidates are fielded by 32 political parties in the contest for the 26 seats.

The Independent National Electoral Commission, INEC, in Ondo State had distributed all sensitive materials to all the local government areas and ready to conduct the State House of Assembly election .

Akeju assured that INEC is ready to conduct free, fair and credible election in the state, urging the electorate to come out in large number to cast their votes without any fear of molestation and harassment.

Speaking on the kind of legislators expected in the assembly in the next four years, Mr Olugbenga Asaolu posited that Ondo people should vote for people of integrity who have overall interest of the state at heart.

His words:” It is quite a pity that we don’t have people like Alex Adedipe, Olorunnibe Farukanmi, Jolowo and their likes in the House of Assembly again. They were colossus and beauty to behold when they were members. The assembly during the time of Baba Adekunle Ajasin consisted of men of honour and integrity who helped the governor to succeed and achieved much in the state.”

“What we have today are those who sleep when serious issues that will take the country to greater height are being discussed. Ondo State people should rise up and go for the best”.

While contributing to the issue, Miss Anuoluwa Olajide said that the people of the state should rise to the occasion by trooping out to elect only those who can move the state forward.

“We are looking for quality men and women who can defend the interest of students in the House of Assembly. People who will look critically at what, we are paying today as tuition fee and slash it down, so that, many of our students would not be drop out.

“We are looking for people who will always fight for the overall interest of the people of Ondo State and not fighting for their pockets. The assembly is to make laws that will galvanise the state forward, but the quality of people in the assembly sometimes has gone down. We have those who are sleeping, those who are ‘seconders’ and have not contributed meaningfully to debates in the assembly since.

Also contributing, Pa Adekunle Ojo urged the people of the state to be orderly, comport themselves and not do anything that will set the state on fire again.

According to him, this Saturday’s election should be used to vote for the best candidates that will represent their interests. Ondo State people should use the ample opportunity to elect those who will fight for them, have the overall interest of the state at heart, those not selfish, those who are patriotic, dogged and those who are ready to work for the state selflessly.

To Mrs Esther Daramola, the kind of legislators we want in Ondo State are those who are committed to the overall interest of the state, those who are ready to serve without conditions, those who will be caring for the people in their constituencies and not those who will be sleeping and contribute nothing to the development of their people and state as a whole.

Her words:” We want men and women who are committed, knowledgeable and ready to work for the overall interest of the state. We don’t want assembly that will be working against the Governor, against the state and the people of the state”.

To Monisola Adepegba, ” I want an assembly that will make the state habitable to live, where people will be living in peace, we want people that are righteous, upright and committed to move the state forward”

“We want people that will be ready to contribute to issues that will galvanise the state to greatness. We don’t want assembly men that will serve as a stumbling block to the progress of the state, that will deny their constituencies dividends of democracy.

“We want people who are ready to serve and not to be served. The essence of having a good House of Assembly is to have good governance, good state and we must go for good and committed people who will serve our interest on Saturday.”

Adding to this, Mrs Iyabo Awolumate urged the people of the state to vote for the best that can fight for them this coming Saturday.

She said that House of Assembly is not meant for lazy people, those who will go there to sleep but for committed and serious minded people.

Awolumate called on the electorate to come out in large number and cast their votes without favouritism.