The making of 9th National Assembly 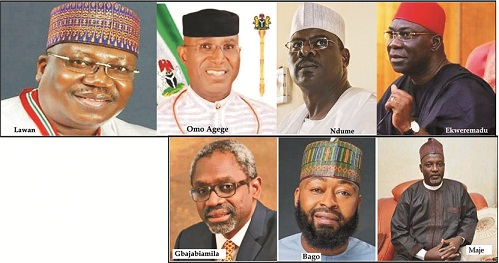 The making of 9th National Assembly

By Bisi Olominu
|
The moment Nigerians have been waiting for with trepidation came to past yesterday as members of the  ninth Senate finally elected the President and Deputy President of the assembly.

It was high wire politics as all the political parties were well represented to ensure that justice was done on behalf of their candidates, parties and interests.

Political big-wigs also in attendance to witness the convocation of the 9th assembly and to see to it that the rigmarole that characterised the 8th assembly did not happen included the National Chairman of APC, Comrade Adams Oshiomole and his team with the party’s big-wigs were all at the hallow chamber to witness the election.

The senators too engaged in last minutes meeting to protect their interest. “

At the end of the election and special sitting, Senator Ahmed Lawal emerged the new Senate President with 79votes while Ali Ndume scored 28 votes. The total votes cast were 107.

Earlier in his acceptance speech, Lawal had congratulated his colleagues and challenged them to put the interest of the country first. He posited that the country had given them opportunities to serve, therefore they must all delivered on the vital and critical sustainable good governance to Nigerians.

Ahmed Lawan urged members of the 9th assembly to be united in all things, think as the representatives of Nigerians, come together and face the reality of the enormous challenges facing the country since the advent of the Forth Republic.

He urged members not to allow anything to come between them but all uniting to perform their constitutional responsibilities. He added that he is of All Progressives Congress, APC, stock, but believe in all members putting the interest of Nigeria at heart.

Lawan said what gladdened his heart was that all senators have been united to confront the problems confronting the nation, noting that it is their function to provide security and good welfare to Nigerians.

He said that under his leadership in the next four years, security and provision of employment for the teeming youths in the country will his priority.

He assured that the economy will be sustained and Nigerians will have sense of belonging.

He added that political differences will not whatsoever hinder them from performing their constitutional duties.

Lawan urged his colleagues to work for the national interest of the country and be patriotic in serving the nation.

His co-contestant, Senator Mohammed Ali Ndume said despite people calling on him to step down from contesting, he could not but go ahead to contest in the interest of the nation.

Ndume also said that budget delay would be a thing of the past under his leadership, while unnecessary bickering between the legislature and the executive will be over.

For the Deputy Senate President office, the two nominators, Senators Ovie Omo Agege and Ike Ekweremadu slogged it out.

He assured that he would serve them in humility and put the interest of the nation at heart.

Swearing of senates-elect was later done by the Clerk of the National Assembly.

Reacting to the outcome of the elections, the Publicity Secretary of All Progressives Congress, APC, in Ondo State, Steve Otaloro said that the outcome was a welcome development as it would afford the party to carry out its election promises to Nigeria.

“It gladdens one’s heart that for the first time, the party played real politics in the National. Assembly electing the Senate President and Deputy Senate President. It is not a surprise to us in the party, the election was a departure from what we experienced four years ago.

” The election of APC candidates will make it easy for the two arms to work together. It will also make the legislature as an arm to independent as members will now be ready to work for Nigeria.

“Budget that was delayed for several months will now be expeditiously passed and members will be patriotic to deliver dividends of democracy to Nigerians.

” The election will also make the National Assembly members to confront the issues of security, unemployment and economy to be confronted squarely by both arms in the country, instead of one arm doing it and the other arm working at cross purposes. “

When the Publicity Secretary of People’s Democratic Party, PDP, in the Southwest was asked about the outcome of the election, he reacted “no comment”.

Meanwhile, Hon. Femi Gbajabiamila has emerged as the Speaker, House of Representatives. He polled 281 votes to defeat his opponent, Umar Bago  who pulled 76 voters.

The Deputy Speaker, Idris Maje, a.k.a Wase was elected unopposed by members.