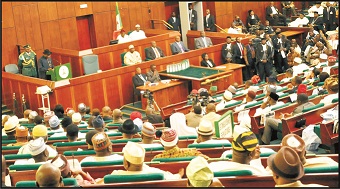 THE action of security agents from the DSS is generating reactions from many Nigerians. Acting President Yemi Osinbajo condemned what he described as the unauthorised takeover of the National Assembly by security operatives , saying it was a gross violation of constitutional order, rule of law and all acceptable notions of law and order.

HE has also announced the sack of the DSS Director General, Lawal Daura. In a statement issued by his spokesman, Osinbajo claimed that the Daura-sanctioned siege on the National Assembly had no government imprimatur.

THE ruling All Progressives  Congress has also condemned the invasion. A statement signed by its acting spokesperson, Yekini Nebena reads in parts: “Our party remains a law abiding political organisation and advises every constituent part to abide by the tenets of our constitution and our democracy.

‘WHILST our contention with the leadership of the National Assembly as currently constituted is a matter of public record, we still believe that the legislature as an independent arm of government must be allowed free reign for vibrant contestation of ideas and values amongst its members within the context of their constitutional mandate and for the benefit of the Nigerian people.”

THE Peoples Democratic Party (PDP) in a statement signed by its National Publicity Secretary, Kola Ologbondiyan called for investigation by an independent panel of inquiry headed by a retired Chief Justice of Nigeria to examine the remote and immediate causes of the invasion.

THE National Assembly has condemned it, vowing that such would not happen again in the country.

WE therefore join every lover of democracy and good governance to condemn this unwarranted assault on the important democratic institution in the country.

THE siege was also an act of cowardice and an unconscionable assault on a national institution which should be opposed by well meaning people in the society.

OUR  take is that the denial of access to lawmakers by masked DSS men for whatever reason is despicable, untoward and portrayed DSS as a reckless organisation operating without temperate rule of engagement.

IT should be noted that the 1999 Nigerian Constitution in Sections 4, 5 and 6 established the three arms of government; Legislature, the Executive and the Judiciary, with separate powers and functions. They are expected to act independently and autonomously, without any interference from one arm of government in the affairs of the other.

THE DSS are part of the executive arm of government and it is totally unconstitutional for it to have invaded the premises of the National Assembly in such a  commando fashion as if the nation is  under military rule.

WE commend Acting President Osinbajo for his timely action by not only condemning such action but sacked the erstwhile Director of DSS, Lawal Daura and replaced him with Matthew Seiyefa.

HIS intervention has gone a long way towards restoring confidence. It has also sent a powerful message that  the DSS cannot be recklessly deployed against any democratic institution in the country.

THE acting president’s swift order removing the head of DSS is instructive that the era of security recklessness in the country is over for  good.

WE call for an independent enquiry into this show of shame at the National Assembly. We recommend that such panel should be headed by a respectable retired judge and be devoid of political party members. Our position is that Nigerian need to know what actually happened and not just be guessing or reduce issue of such national importance to gain leverage within the political parties in the country.

WE  also plead with the National Assembly not to embark on a long recess at this critical moment in the country. The Hope is of the belief that if the Assembly had been in session, probably Tuesday’s incident won’t have happened.