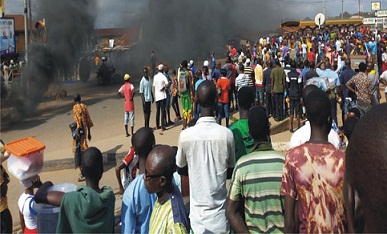 By Michael Ofulue
|
The relative peace enjoyed in Akure, the Ondo State capital was last week Wednesday August 29, 2018 disrupted following protest over the death of a commercial motorcyclist and the death a woman who was among the protesters, but was shot dead in the process.

The death of the duo in such tragic circumstances, and the reactions that followed, paralysed sociol-economic activities in the state for several hours that day.

The “okada” rider, simply identified as Yakubu Azeez, was reported to have been crushed by a car driven by an officer of Nigeria Security and Civil Defence Corps (NSCDC), who is currently being detained at the Department of State Criminal Investigation and Intelligence of the Ondo State Police Command.

CITY WATCH learnt that trouble started on Tuesday when the late Azeez, while riding a motorcycle and carrying two passengers was allegedly hit by the NSCDC operative in his Toyota Camry popularly Called “Orobo” while rushing to write an examination.

An eyewitness told CITY WATCH that the NSCDC officer, on realising the level of injury sustained by the victims, rushed them to the Akure Specialist Hospital for treatment where efforts made to save the life of  Azeez were unsuccessful though the two other victims of the accident, who sustained various degrees of injuries, survived.

The news of Azeez’s death triggered a widespread protest by other “okada” riders, his family members and some angry youths, who the next day, which was Wednesday, in their large numbers, moved from the popular Oba Adesida road and headed for the NSCDC headquarters along Adekunle Ajasin Road.

But at a point close to the NSCDC office, a woman, who was among the protesters was reportedly shot dead in a manner that is yet to be unraveled.

The deceased woman, whose identity was given as Rita aka Iya Delta, CITY WATCH authoritatively gathered, was an acquintance of late Azeez, as the two were bricklaying workers.

It is unclear who fired or from which direction the gun shot, which pierced her neck and killed her on the spot, came from.

An account of the incident as made known to CITY WATCH was that the gun shot that reportedly killed the late Rita came from the direction of the NSCDC office, where the officers were said to be shooting sporadically into the air on realising that an angry mob was marching close to their office in protest.

Reports had it that the deceased “okada” man hailed from Iwo in Osun State, while late Rita, who came from Delta, met Azeez in the course of both of them doing bricklaying jobs in Ondo state.

While speaking with CITY WATCH, the NSCDC Public Relations Officer, Mr Samuel Oladipo confirmed the arrest of the NSCDC staff involved in the Tuesday crash, and said he has been handed over to the police pending further investigation.

Oladipo who did not disclosed the identity of the suspect, said the officer is serving at the FCT command of NSCDC, but came to Ondo State to write an examination when the unfortunate accident happened along Ondo road in Akure, which eventually led to death of late Azeez.

The NSCDC PRO, however, denied that one of the officers in the state killed late Rita, though he confirmed that the deceased was among the angry protesting youths at the time bullet hit her.

His words: “It was not one of our officers that fired the gun that killed her.

“All we heard was that some protesting youths were heading towards our end and we closed our gate.

“At the time the women was gunned down, the protesters were at the police traffic warden post close to the Police Officers’ Mess.

“We are trained officers and we know when to use a gun and the incident did not warrant the shooting of a gun.

“I can confirm to you that hoodlums hijacked the protest to carry out their dastardly act.

“The officer that was involved in the accident took the victims to the hospital and even dropped some money for their treatment.

“He also reported himself to the police before proceeding to write his exam but it was unfortunate that one of the victims of the accident later died”.

When  CITY WATCH visited Oja Oshodi area in Akure where the two deceased used to assemble every morning with others waiting to be hired for bricklaying jobs, one of the residents who did not want his name in print disclosed that the deceased lady was pregnant before the unfortunate death.

He described her as hardworking, friendly and jovial when she was  working.

He maintained that she was killed by a trigger-happy NSCDC officer during  the protest against the death late Azeez.

CITY WATCH learnt that it took prompt and combined intervention of conventional and mobile policemen, men of the Nigeria Army and Department of State Security Services DSS to restore normalcy as some angry youths and okada riders in protesting the deaths started burning tyres on Oba Adesida road and other major roads within the state capital with free flow of traffic disrupted and abruptly brought to a halt.

The protesters, CITY WATCH gathered, hijacked one of the State Government “Task Force” patrol vehicle and used it to convey the two corpses to the governor’s office at Alagbaka in Akure to register their grievances.

Getting to know who shot late Rita is what the Homicide detectives of the State Police Command are now tasked with to  unravel in the course of their investigations.