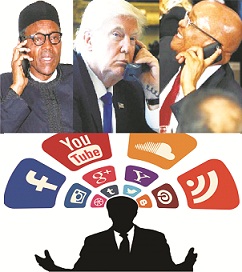 The social media for political communication

By Theo Adebowale
|
A philosophy teacher in University of Ibadan was one morning tackled by his two children, pupils of University Staff School. Daddy wanted to prepare them for school, but they told him that for them there was no school that day. They called his attention to the fact that other pupils were brought to school in daddy’s car and so they could not tolerate being taken to school by other means. There was no dissuading them from school boycott that day.

Their father had to go and raise funds to get a Volkswagen Beetle car. That was effective communication. Some two years later, the protest was repeated, arm twisting their father to get something better than a beetle. Betsy’s approach was different. Unhappy with her father’s Volvo 244DL, she always announced. I will buy car, e good for you. One day, daddy came home with a Mitsubishi Pajero Jeep. She was so excited, she looked for a sharp nail to engrave the father’s name and address on the car. The father flogged her for abusing the car. It was the end of the promise to buy the man a good car, it was also an opportunity for her to demonstrate her writing skill, effective communication.

When the GSM was introduced to Nigeria almost 2 decades ago, every user promptly acquired the skill to make calls. That was about the only function millions of owners of handset could perform. Dr Tunde Owoeye was privileged to attend a seminar where participants were encouraged to compose messages and send short messages. He went ahead to teach us the skill and to use the application. Today, we do not only make calls, send SMS, but more than that the social media has become, perhaps, the most prominent means of communication, and very effective. Information is promptly transmitted to any part of the world, dividend of information technology. Like those children of the philosophy teacher, and Betsy communicated effectively, so also does effective communication take place today but with a great potential to reach a larger audience in a short while, and influence them to take a line of action. Many applications including WhatsApp, Youtube, Instagram, Telegram facilitate vivid communication with a high level of potential for improving on understanding and minimizing misunderstanding. Agents of disunity, criminals and other fugitives also find the social media a handy, cheap and efficient tool to carry out their enterprise. That this innovation is so dynamic and carries properties of malleability and adaptability portends great danger criminal elements can unleash on society employing the social media for dastardly activities.

If countries like the United States, Europe and Asia with technological and cultural wherewithal to monitor and control information technology can be at the mercy of such criminals, there is much work for Nigerians and their government to ensure sanity. But shall we also submit that tackling criminal activities in the media must be devoid of trivialities and sentiments. For example, fake news is a major concern on the new media. It must be well defined and rationally identified. Hate speech is another concept that must be well captured to exclude abuse of legislative and judicial processes. This is an opportunity for government to demonstrate the essence of transforming the Prison Service to Department of Correction. The department should be able to reform criminals including cybercriminals and prepare them for a second chance.

Communication is an essential process in every community. Socio-economic problems like unemployment, inflation; hunger and insecurity among others have a way of interfering with and corrupting the process. Has it not been said for instance, that a hungry man is an angry man? So if he finds a space in the social media, he might want to inflict pain on the system that it may share in his misery. Youth unemployment is a strong contributory factor to crime including those on the social media. Whereas the Federal Government is making efforts to address these economic problems, strategies may have to change and officials would need to engage them in conversation. Government must have access to the mindset of the youth and seek to influence it with transparent patriotism. Lip service would not help national issues as much as equity, fair play and justice. Selective application of rules can only provoke ‘hate speech’ and fake news.

As pointed out earlier on, primary school pupils possess skill and courage to communicate effectively at home because they are sure they are recognized as bonafide members of the cell. In the final analysis, parents are seen as committed to deliver the good life. In the same vein, the state is expected not only to meet the needs of the citizens, but also in such a way that enlists the confidence of the people. We expect government to realize that successive governments have eroded popular support over the years; it must make deliberate attempts to recover the trust. If government can successfully undertake forensic auditing of Niger Delta Development Commission, recover stolen funds and execute to specifications the various abandoned projects over the place, it would have set out on a path of ‘reconciliation’ with the distrustful citizenry. Recovered funds would provide opportunities for legitimate economic activities in the land. Like Betsy engraved her father’s identity on the new car, the people would also stand with the government and its policies.

This is important in the face of climate change, global recession, extremist attacks, and all manners of uncertainties. The ability of the state to mobilize its people for national development would definitely enhance its chance for successful policy making.

Communication is essential and must be professionally employed in nation building. A leader with zero tolerance for corruption can easily mobilize the populace to overturn corruption to adopt hardwork in service to motherland if only he is above board, not given to nepotism, not beclouded by sectional or ethnic favouritism. When leadership directives are communicated in one clear language and for the greatest good of the greatest member, WhatsApp, Youtube, Instagram, Facebook, the social media would disseminate it. Those singing discordant tunes would be stranded in their minority.