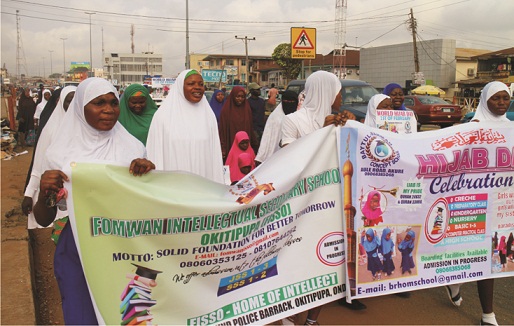 Edited by Afe Folasade
|
The theme for  this year World Hijab day is “Better Awareness, Greater Understanding  and  Peaceful World”.

This  concept of Hijab day  celebration was brought to the limelight last year even though it is  a universal declaration by Almighty Allah (SBHT)  in the Holy Quran while Quran 7 verse 32. say, “who has forbidden the adornment with clothes given by Allah, which he has produced for his slaves, and all kinds of Halal foods, say  they are in the  life of this  world, for those who believe, only for a people  who have  knowledge.”

The  stated  purpose is to  encourage  all Muslim women to wear Hijah even for just one  day so as to get reward from Allah the creator of all creatures.

The day  is to create awareness on the use of Hijab and Muslims  plight against prejudice, bigotry  and religious  hatred. It also open a dialogue as Islam and  Christianity preach  decency.

It is also  an avenue to raise money for charity-World Hijab day Organization.

It is  a day set aside  meant to feel closely to Allah  regardless of religion. Polls revealed  that  about 71% of  women in Hijab face discrimination in European countries, Australia, Asia and  USA. We can all recall  Dridaus Amasa’s case who was denied  being  called  to bar exactly a year  ago, but Alhamdulilah, the case has been won. It  should be noted that Hijab  is not a  symbol of oppression. Women are to use this day to promote healthy, respectful, inter faith dialogue  with families and peers.

Remember that  to strangers, you will most likely appear as Muslim  in Hijab, so be sure not to do anything  that would portray  Muslims or Islam in a negative or hypocritical ways.

Dressing modestly however is really a good idea. Present yourself with dignity and self  respect. At  the end of the day  we should pray  to Allah to protect our veiled sisters, we ask Allah  to shield  them from discrimination and to protect them from those that would act hatefully towards  them due to their Islamic way of dressing. It is  worthy  to note that the use of Hijab is  not a hindrance to development. I believe that the lecturer  will do justice to the theme of this  year’s World Hijab day.

Before  ending my speech, I want to give thanks and appreciate Ondo State government under His Excellency, Arakunrin Rotimi Akeredolu for the tone of tolerance  and amicable co-existence that enable  us to live in peace in Ondo State. We thank God under his government,  no record  of open confrontation by any school  principal  or teacher against the use of Hijab in any of our  public  schools. It will  be recalled  that such ugly  incidence have been recorded in  several states  particularly in the  South Western  part of Nigeria. We also thank  the government for including teachers of Arabic  and Islamic  studies in the on-going  recruitment exercise by  state Universal  Basic Education Board.

The  issue of Hijab should be embraced by all women as ordained by Allah and the society should accept its usage as  a sign of respect of privacy, dignity and freedom of expression and religion.

Muslimat should note that  Almighty Allah is AL Rokib (the watchful)  The one  who  watches  all his creatures and observes everything ever including  our dressing  on earth.

You are addressed the way you  dress hence Muslims should dress properly according  to the injunction  of Almighty Allah, and let us continue this awareness  on Islamic  dressing  not only as a day celebration but right  away in our various  homes.