Home News There are dangers ahead 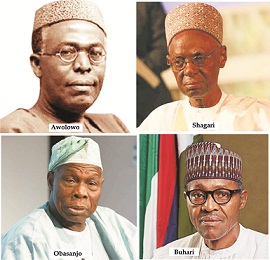 There are dangers ahead

By Theo Adebowale
\
There are dangers ahead. It is in the overall interests of Nigerians that public officials and the citizens recongnise this fact and seek to abort it, or rather minimise these dangers.  Hitherto such dangers were predicted, rather than scrutinize the predictions; they were dismissed by such tags as prophet of doom or saboteurs.

Chief Obafemi Awolowo in his campaigns highlighted how National Party of Nigeria was looting the treasury.  He submitted that the party rather than addressing issues of economy was busy embarking on white elephant projects and its officials looting gleefully.  He saw inflation waxing stronger.

He predicted that if care was not taken, a tin of milk would sell for 50k, a loaf of bread for N100.  He saw public enterprises sinking, the electricity company distributing darkness.  He, together with his predictions were dismissed with ignominy.  Regrettably no effective measures have been taken to terminate those factors that were identified by him to make way for the doom beckoning at Nigeria.

A few Nigerians employed such privileges as official positions, access to the press and access to the corridor of power to make Nigeria deaf to the voice of the sage.  It is in recent times that government came out to tackle corruption, which is the major problem of the Nigerian state.  But because corruption is a network, and a system, we shall soon see how much strength the state still has to sustain the fight against the monster.

Whenever the state, its institutions or officials deliberately delay to take action against a looming danger, it has always been corruption demonstrating its influence.  When public officials were fingered at diverting funds meant for the green revolution into private pockets for personal purposes, the chief executive looked the other way until that Republic was lost.  The nature of corruption is to keep the one that should act away from doing do.

The period of inaction is incubation period for greater acts of corruption.  It is at such times that the ignorant, uninformed and the irresponsible are recruited into the ideology of corruption.  So it was that when the military overthrew the government of Shagari, there were officers in the Army to hinder the War Against Indiscipline, and eventually to terminate that war.

Even the economic policy of the World Bank that was imposed on Nigeria was ambushed by the agents of corruption in power.  Together with their foot soldiers, the Structural Adjustment Programme was given a bad name as its proceeds ended in private pockets.

The economy suffered a great neglect.  Because there was oil boom in spite of unpatriotic attitude of state officials, other sources of revenue generation were neglected.  All efforts were concentrated on oil revenue to share and to expend. Rather than investing in policies and projects that bring development, parasites evolved and multiplied.

They acquired more expensive tastes and invest in divisive devises that would keep Nigerians perpetually in unprofitable conflicts, whereas the Structural Adjustment Programme transformed the economies of Malaysia, Indonesia, South Korea, South Africa and Ghana, for Nigeria it has left behind unemployment, double digit inflation, hunger, militancy, religious extremision and insurgency.  By the day, the divide between the state and the citizen widens.

Any Nigerian, no matter the gravity of allegation of corruption leveled against him, has readymade solicitors and defenders.  The other day a respected professor was defending a public official accused of corrupt practices, he told whoever cared to listen that he would be unshaken in his support because that was the most prominent public official to ever emerge from his sub-ethnic  group.

Iniquities multiply as honour diminishes, in the country called Nigeria where some of the nationals still remember to refer to it as giant of Africa.  As economy underperforms, jobs are no longer there, unemployment multiplies and creative ideas become elusive.  Opportunities ailments of terminal dimension pop up from time to time.

Islamic extremists in the North, the Matatsine of that era took advantage of negligence of officials to visit havoc on the communities.  Over time, there were Islamic religious crises.  From the Northern Zone, the ugly trend moved Southwards.  Militancy reared its ugly head.

There was a major disruption of the economy as the only article of foreign exchange earring was shot down.  Maybe because of the immediate consequence on the economy and the state, some solution was worked out.  But the truth is, products of insurgency still feature prominently.  Abduction, extortion, piracy, and assassination have become means of livelihood to a group of criminals.

Another group emerged for the actualisation of Biafra.  The government of President Muhammadu Buhari confronted it decisively and the insurgency was terminated, at least for a season.

Whenever government fails to act promptly and decisively on matters of security of lives and property, intervening variables and opportunistic tendencies show forth complicating the issue and confusing the policy making process.  So it is with socio-economic tribulation confronting the Nigerian state today.

When the presidency of Muhammadu Buhari seemed to have enlisted an appreciable population of citizens into the anti-corruption crusade, the Fulani herdsmen embarked on plunder of farmlands, waste of lives and property.  In quick succession the herders have been alleged of kidnapping, hostage taking, ransom collection, rape and victim execution.

Because government would not take prompt action against the criminals, remnants of previous acts of insurrecting militancy while ‘underemployed’ and ‘redundant’ operatives of Boko Haram would gladly transmute to herdsmen and keep the siege on the people mounting.

Because government would not clamp down on herdsmen and their criminal activities, there are dangers ahead.  Belated actions have often been found ineffective as such solutions have been overtaken by events.  For example good as community policing would appear, it cannot effectively address crimes associated with herdsmen.  A stitch in time would have contained the manace, would have greatly minimized opportunistic variables from complicating the matters.

Above all, it is time government should come up with a clear policy on issues pertaining to insurrection, militancy, and associated crimes and lawlessness.  This would remain inadequate unless there is institutional muscle to implement the policy.

So long there is selective execution of policy, law enforcement agencies would lack courage to ensure security of lives and property.  In the absence of an enabling environment the economy would suffer, inflation would continue to rise, jobs would be lost, unemployment would increase, and crime would continue to harass the people.

It has become imperative for the Nigerian state to discontinue the practice of dismissing predictions because of the character or antecedents of those who make such prediction.  A rational attitude to analysis and projections would enhance quality of policies and credibility of officials.

Actions and inactions of government so far have produced certain implications that loudly suggest that there are dangers ahead.  Suspicion and distrust that have cropped up definitely call for an urgent action to avert such dangers.