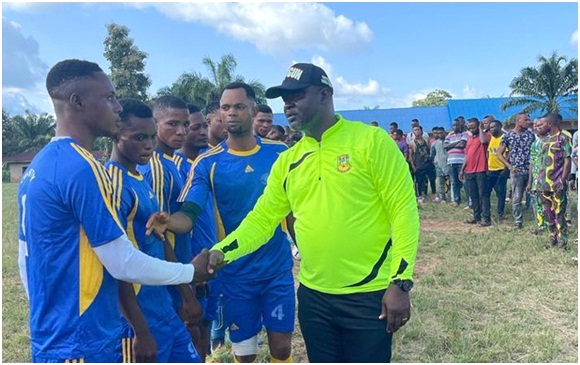 Eight Clubs have qualified for the quarter final stage of the Akogun Annual Football Competition 2021.
A total number of 70 goals were scored at the group stage, three hatricks, 11 penalties while 89 yellow cards and three Red Cards were issued at the end of the Group Stage.
Godswill FC of Ikanmu who top Group A in Group stage has met Allover FC of Ikese on Monday July 19, 2021, while Wangara FC of Iwaro leaders of the Group B locked horns with Ayegunle FC who is the first runner up in Group D on yesterday July 20, 2021, July 21, Iboje FC will battle Mekun Mekun FC of Agba, while the last quarter final match will be between the defending champion Big Stars of Agba and Charity FC of Ikanmu on tomorrow.
The final is billed to come up on Tuesday, August 3, 2021 and Football Scouts and Coaches will be on ground on the final day.
According to the organiser who is a Lawmaker representing Akoko South/West 1, the annual competition is geared towards discovering football talents at the grassroots.
Apart from the mouth-watering rewards, the best player of the competition will be given life changing opportunity to excel in the game of football.
He said an Ex- Nigerian international footballer, Mutiu Adepoju will be making a special appearance at the finals expected to be very exciting.