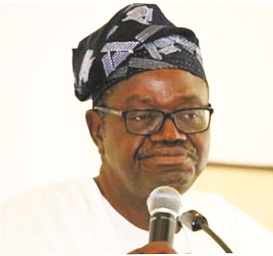 The  Minister of State for Niger Delta, Senator Tayo Alasoadura in this interview with the Features Editor, BISI OLOMINU and MARIA FAMAKINWA, speaks on the ongoing probe in NDDC, corruption  in the organisation, Amotekun imbroglio, chances of Governor Oluwarotimi Akeredolu in  2020 guber  election  and on other sundry issues.

As the Minister of State for Niger Delta. how has it been ?

It has been wonderful for me since my assumption of office as the Minister of State for Niger Delta. It is part of the learning curve that one has to go through. You have to learn very fast most especially in the Ministry of Niger Delta where you have to deal with individuals and people collectively. You know that the ministry and parastatals under it are interventionist organisations. When you say interventionist, it means that the people you are dealing with or interfacing with  are people you want to alleviate their suffering. So it has been a learning curve and I am learning very fast and I believe  that at the end of the day we will be able to do what is expected of us and move the Niger Delta forward.

Why is it that constituting the NDDC board has always been a contention between the Executive and National Assembly?

I do not believe that there is any contention because every arms of government has its own duties. It is the duty of the Executive to nominate those who will serve in the Board, while the National Assembly has the constitutional right to confirm or reject any nominee of the Executive. As soon as the Executive submits the names of their nominees, their job ends temporarily at that level because you cannot do anything about it until the National Assembly says  yes or no.

Immediately the National Assembly gives its clearance, the job of National Assembly has ended automatically. So, it is left for the people who nominated to say go and start work. It is the Executive that can inaugurate, swear in or do anything about the Board of any organisation set up by the Federal Government. At the end of the day, because of the interim Board that was set up before the clearance of the new board which  have to be put on hold. And eventually President Muhammadu Buhari dissolved the Board and said that after the Interim National Executive Board has completed its assignment, we can then have a new Board.

How cordial is your Ministry with the National Assembly?

We are cordial. We are two separate arms of government, none is superior to the other. Incidentally, the two of us who are Ministers in Niger Delta ministry were up to June last year,  members of the National Assembly. As far as I am concerned , our relationship is very cordial. Though, we may have one or two disagreement which is normal because husband and wife do disagree likewise mother and the children. When disagreement happened, we listen to each other and take the best decision in the interest of Nigerians.

The forensic audit being carried out on NDDC is of interest to Nigerians because of the huge amount of money been involved. Do you think that this government will implement the decision and recommendations that will be arrived at by the forensic auditor?

For God sake, of all the past rulers, who has the courage of President Buhari? If the man said in his wisdom go and carry out forensic audit of a board, do you think that they will be doing it for fun ? When that man says something, he stands by it. He hates graft and everybody knows that there have been monumental fraud in NDDC. He ordered the forensic audit to be carried out and he will ensure that whatever recommendations made will be followed because he hates  graft. If he now get the result, do you think  he will just put it under his table without taking actions?

That is not President Buhari. He will follow it up and ensure that those who have  taken money unjustly cough it out. I can assure you that at the end of the day, Nigerians will love whatever decision taken   on the forensic report. I know it is a very interesting thing that almost every Nigerian that knows about NDDC is interested in what we are about to do. I am sure that close to N3trillion  have been sunk in NDDC in order to alleviate the suffering of  the people of  the region, what can one show for it?

On our part, we have decided that now that the NDDC is under us, we are going  to embark  on  monumental projects; projects that people can see, projects that Mr President can come and commission.

I was at Agadagba, in Ese-Odo Local Government days ago and what the Ministry of Niger Delta put there as skill acquisition centre is commendable. The buildings there are as good as  that of  a university. For what? Idea wrongly conceived. At the end of the day, the community and the Federal Government cannot use it, yet, about N4billion was sunk into it. I went round to see their housing estate, all the housing estate  are  in the bush. Even some of them that were allocated to people at N250,000 for a whole bungalow were left unoccupied because there were no facilities, no road, water, electricity there  and you want people to live there?

As far as I am concerned, when we receive the forensic report, we are going to do the needful and if we find out that  contractors  handling the project  are short of our expectations, we will ask them to go back because there is no way that such huge amount will be wasted in this country and nobody will answer for it.

The problem of sea incursion has been threatening the lives of people in Ese-Odo and Ilaje Local Government Areas, what is the NDDC and Niger Delta ministry doing or planning to do before the next rainy season?

Everything about the Niger Delta is not the duty of the NDDC or Niger Delta Ministry. Every oil producing state takes 13 per cent derivation fund which means that the State Governor should be responsible for that. Our priority when the 2020 budget is out, is to ensure that the construction of the  coastal road from Ilaje to Lagos start  because it is going to be of tremendous economic value to our people. Ondo State is trying to put Olokola into shape, if we are lucky that the sea port comes alife and we construct  good road that can link Ondo State  with Lagos State, in ten years time, Ondo State will not be the same again.

What has made Lagos to be rich is the seaport. Singapore has no single mineral but has the best GDP in the world. They only have a pass where every ship going to Asia will berth and the one coming from Europe to Asia will also berth. That has been their source of income and they are one of the richest countries in the world today. So, we must think out of the box to move this country forward.

What is your take on the new security outfit in the South West codenamed Amotekun?

I am hundred per cent in support of the programme. I do not believe that it is an illegal organization. I am happy that someone has gone to court to challenge the view of the Attorney General and Minister for Justice on the issue. The number one duty of any government is to protect lives and property of the citizens and if people come up with a laudable idea to assist the government at achieving this, such should be commended. But for someone to come out saying it is illegal, I disagree with him. Fortunately,  I can  say what he said has not come up for discussion at the Federal Executive Council, so, I cannot be accused of going against the decision of FEC, in which I am  a member . What he said was his own idea and I believe what he said was not from Mr. President. Mr. President would not have sanctioned such. Since Amotekun is to protect lives and property of the citizens, I want it to be successful.

Is the Minister for Justice not reflecting  the body language of Mr. President?

Which body language? Mr. President doesn’t have body language. If by now ,this man has been president for almost five years, he talks straight, whatever he wants to say, he say it. Whatever he cannot do, he say  it. This body language thing I don’t agree with it.

What can be done to make Amotekun effective?

How prepared is your party on the gubernatorial election in Ondo state this year?

APC is going to win convincingly because the State Governor, Arakunrin Oluwarotimi Akeredolu  is doing well. Governor Akeredolu is delivering on his campaign promises. This is a Governor who has cleared all outstanding salary arrears, pays workers’ salaries as  and  when due, give hope to the hopeless citizens, open the State up for economic development and many more. Walk round the State, you will appreciate the present administration for embarking massively on people’s oriented projects across the state. We are very confident of winning the coming election.