Three in court over theft 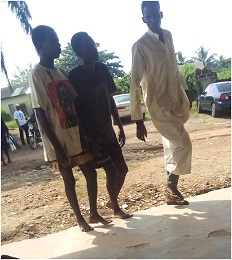 Three unemployed men have been arraigned before an Ore Chief Magistrate Court for allegedly stealing building materials worth N3,366,250.

The trio: Sulaiman Idris, 25, Aliu Salisu, 18, Magaji Umar, 18, were brought to court on three counts bothering on conspiracy to wit felony and stealing.

According to the prosecution, the defendants committed the offence between July and October 30, 2022 along Ore-Ofosu express road, in Ondo State.

He also alleged that the third defendant recieved the stolen building materials from the first and second defendants.

The defendants pleaded not guilty to the offence leveled against them.

Martins however, prayed for an adjournment to enable him study the case file and prepare his witness for hearing.

The defence counsel, Mr A. J Agbor did not oppose the prosecutor’s application. But he prayed the court to grant his clients bail in most liberal terms

In her ruling, the Chief Magistrate, O. A. Omofolarin admitted the defendants to bail in the sum of N1m each with two sureties in like sum.

However, Omofolarin ordered the defendants to be remanded at the Okitipupa Correctional Centre pending the perfection of thier bail

She adjourned the case till November 22, 2022 for hearing.