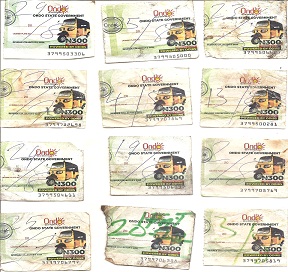 Ondo State Government has begun the arrest of perpetrators of ticket racketeering for commercial tricycles known as Keke Napep in Akure.

Investigation by The Hope revealed that some of the perpetrators have been arrested while the government is on the trail of others.

The Hope learnt that some of them have gone into hiding in order to evade arrest.

It was gathered that sanity has been restored into the ticket sales, as commercial tricycle drivers were no longer forced to pay illegal fees.

When our reporter visited some of the units in Akure,the ticket agents were seen pleading with the tricycle operators to give them feeding money aside the N300 normal due printed on the ticket.

Speaking with The Hope on condition of anonymity, one of the operators said government had arrested some of the perpetrators of the crime while some others have gone into hiding.

He said commercial tricycle operators in their units have seen the government task force on the trail of those who have gone underground to effect arrest.

The operators said the ticket agents have now been selling the tickets to them at the official rate of N300 but we’re only pleading that they be given N100 for feeding.

He, however, enjoined government to prosecute those arrested because he said some of them were boasting that they will be released.

Another operator described the situation as a big relief as the ticket sellers now sell based on the price indicated on the ticket.

He said some of the ticket sellers do come back in the evening to beg for money for feeding, while few ones threatened to collect returns immediately after selling the ticket to them.

Chairman of the State Internal Revenue Service, Mr Tolu Adegbite confirmed the arrest to The Hope when contacted on phone.

Adegbie disclosed that many of them have been arrested after an investigation which showed that they were collecting over the authorised money into their personal purses.

He explained that those caught would be prosecuted and made to face the full wrath of the law.

It will be recalled that The Hope had in its last edition uncovered the fraud in the ticketing system of Tricycle (Keke Napep, Maruwa) commercial transport operators.

Findings revealed that ticket givers at various collection units on the highway, collect more than the official rate on the ticket issued for the operators by the Ondo State Government.

It was discovered that while N300 was written on the ticket, riders pay as high as N500 daily.

Another operator who confirmed the extortion, added that the so called executives were also  collecting as much as N20,000 as registration fee from new entrants into the business, while the least payment for registration for those who were introduced by their associates is N12,000 for same registration.