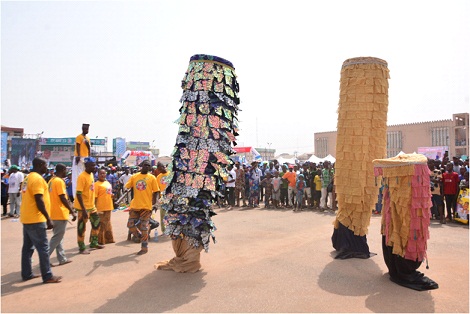 Several food vendors and traders of various items have expressed gladness as they made huge sales at the campaign rally of the All Progressives Congress presidential candidate, Asiwaju Bola Tinubu in Akure, the Ondo State capital.

The campaign rally held at the M.K.O Abiola Democracy Park, Akure, offered food vendors, broom sellers and the sellers of caps and mufflers crested with APC logo the opportunity to make huge amount of sales, due to the large turn-out during the event.

Speaking with The Hope, a broom seller, Miss Favour Emmanuel, was over joyous for making huge sales as members and supporters of the party surrounded her  buying her brooms.

Favour, who was stopped by the convoy of the state lawmakers led by the Speaker, Mr. Bamidele Oleyelogun at the venue of the campaign rally, expressed excitement as the lawmakers bought all her brooms worth N3, 600 and asked to go with the N400 change.

The girl explained that she had never made such sales since she has been hawking.

As a result of the prompt sales, she returned to their stand at Oba Adesida market to bring more brooms for sales.

In his excitement, a bag seller, Tayo Ijibuyi after making large sales of his bags designed with the party’s logo said expressed happiness with the rate at which the crowd demanded for the bag at N200 per one.

A food vendor , Mrs Yemi Afolabi and a pastries seller, Justinah Uche, said they sold more than their normal sales on an ordinary day at the event

Mrs. Afolabi disclosed that she was able to sell quickly, while Uche explained that the campaign rally made it possible for her to make sales of three days within some hours.

They were full of appreciation for the State government, which provided peaceful atmosphere for them to render their services.

“I’m happy that I made better sales are made and l pray for this kind of rally to hold so that more money will be generated, ” Mrs. Uche, said.

Also, numerous drinks sellers expressed their satisfactions with what they described as appreciable sales the event has fetched them

The rally was an exhibition of culture as masquerades ‘agere’ and other entertainers entertained the mammoth crowd.