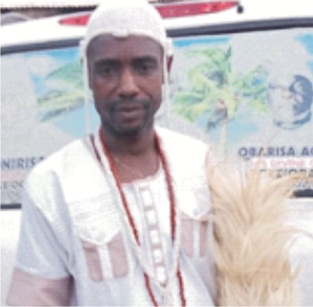 The Oba Ala -Olorisa of Ondo State, HRH Gbodi Monday Omosule has disclosed that adherents of traditional religion are not idol worshippers, but  traditionalists and that it will be improper to reduce the understanding of culture to fetishism .

He described culture as an effective tool for development if carefully handled and practised .

In his words:” It’s important to note that culture is central to development , it helps in the transmission of knowledge , norms and values of a given people and therefore, can serve as a good medium to change negative mindsets about the environment, relationships among others.”

Omosule stated this while speaking with The Hope in his palace at Okitipupa.

He called for intensified efforts among stakeholders to revive Yoruba culture and tradition from going into extinction.

He described Yoruba as one of the largest African ethnic groups in sub Sahara desert with a deep culture.

The Orisa priest added that a culture well thought, practised nurtured, cherished and maintained has relevance in the lives of the people.

On the practice of traditional religion which many described as fetish, Oba Omosule said  traditionalists believe in one Almighty God who made all things and controls all things.

Ironically, he said some of our cultural values are indeed not useful today, but that is not an excuse to throw away the bath water and the  baby.

He advised parents and guardians to endeavour to promote Yoruba language among their children in the overall interest of the Yoruba race .

Oba Omosule believed that a day should be set aside for the traditional adherents just it is done for christians and Muslims to celebrate and remember Jesus Christ and Prophet Mohammed.

On how to checkmate the overzealous politicians, the Orisa priest said it is high time politicians are made to swear with Ogun ( god of iron ) instead of Bible and Quran.