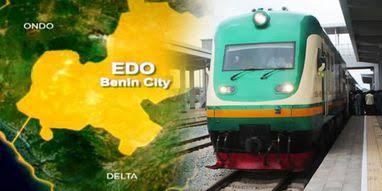 The Edo State Government has confirmed the arrest of two traditional chiefs in connection with the January 7, train attack which resulted in the kidnap of 20 passengers at the Igueben train station.

The state Commissioner for Communication and Orientation, Chris Nehikhare, disclosed this shortly after the state executive council meeting in Benin on Wednesday.

According to him, seven other suspects had also been arrested in connection with the incident, adding that two remaining passengers in captivity had also been rescued by security agents.

Nehikhare said, “The success story in the kidnapping is that five persons and two village chiefs have been arrested in connection with the incident and they are helping with investigations,” he said.

The commissioner who did not give the names of the village chiefs, said further details should be sought from the police.

However, the state police spokesman, Chidi Nwabuzor, could not be reached for details as his phone was switched off.

However, the Executive Director, Esan Youth for Good Governance and Social Justice, Benson Odia, told newsmen that the chiefs were innocent, adding that their arrest had political undertone.

He said, “You see, the government is playing politics. The chiefs were never accused of being a perpetrators or whatever. The arrest of those chiefs and the traditional rulers has political undertone because these days they are now partisan.

Odia said banditry was not only taking place in Igueben forest and Udo forest but “because there was a train attack, the governor is now trying to use some traditional rulers as scapegoats.’’

He added, “Even in Edo North in Akoko Edo, the local government of deputy governor, kidnappers are on rampage there and Fulani are also grazing cows.

Meanwhile, the House of Representatives, on Wednesday, resolved to observe a minute of silence in honour of a police officer, DSP Michael Adams, who died in an operation to rescue President of the Customary Court, Mrs Precious Aigbonog, from her abductors in Edo State.

The House also urged the Inspector-General of Police, Usman Baba, to deploy more Mobile Police personnel in Edo Central Senatorial District of Edo State, while urging the Chief of Army Staff, Lieutenant-General, Farouk Yahaya, and the IGP to set up a Nigeria Army barracks or a Forward Operating Base and a Police Mobile Force Base, respectively, within the district.

The House further mandated the Committees on Army and Police Affairs to ensure compliance with the resolutions and report back within four weeks for further legislative action.