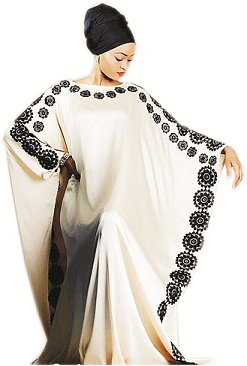 By Bamidele Kolawole
|
Kaftan is a traditional wear mostly worn in Northern Nigeria. The style was originally popular amongst the Hausas, but today, people of other tribes are also wearing it, because the outfit is simple and easy to wear. It can be worn to any event.

The Kaftan is a traditional two-piece design with sleeves and a long pant. It is especially good to wear because of the minimalist style, as well as the various colours and designs. Nigerian designers have become creative in the making of Kaftan, and have come up with lovely and distinct designs that fit a wearer’s personality and taste. Interestingly, many women are also going for the Kaftan, although the style has been modified to accommodate the male version.

Mrs Oluwatoyin Adetunji CEO Exclusive house of fashion, Akure, explained that the Kaftan originated from the Middle East thousands of years ago, and has been adapted by different cultures to suit their needs. She said: “It is a free robe/tunic worn by both men and women in different forms.

In Nigeria, it is commonly worn by people of Southwest and Northern regions. The male version consists of a free top with embroidery around the neck and chest area and a trousers (sokoto) made from the same fabric usually fastened with a rope. The women’s style is a full-length, free gown with minimal or elaborate embroidery. Men’s Kaftan length can reach the hip, knees or ankles with short or long sleeves with or without cuffs.”

Adetunji said that the Kaftan has evolved over the years from a free-flowing outfit, usually made with Guinea brocade to smarter and more modern designs made with cashmere, cotton, linen and other fabrics.

“Men’s Kaftan was exclusively worn by men alone,” she explained. “But in recent times, women have found fashionable ways to rock men’s Kaftan with pants (sokoto). Kaftan is a lovely and respectable outfit that is good for the West African climate. It can be worn for casual, semi-formal and formal occasions, with or without a cap (fila).

Kaftan should not be made too tight as to hug the body. You would still look smart, if there’s some allowance.

Kaftan top is usually worn with matching pants/trousers/sokoto, though it can also be rocked with pants of different colours and fabrics. Just keep it simple.

Kaftan can be worn on shoes, sandals and slippers but not on sneakers or sports footwear.

Don’t put on underwear that pops out at the neck of your Kaftan. It gives a clumsy look.