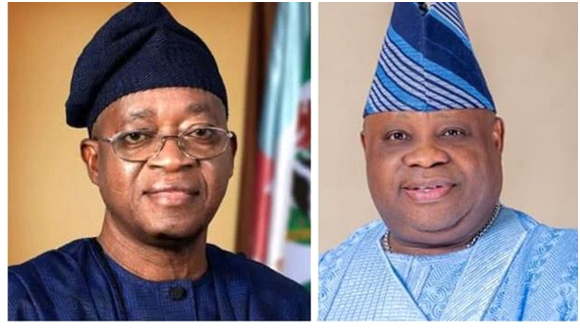 Counsel to People’s Democratic Party, PDP, in the ongoing Osun Election Petition Tribunal, Chief Alex Isiyon failed in his bid to make an oral application, before the  tribunal on the  last Friday Federal Court judgement which disqualified  Governor Gboyega Oyetola as candidate in the July 16 governorship election in the State.

The Chairman of the tribunal , Justice Tertsea Kume rejected the oral application made by PDP’s Counsel Cheif Alex Isiyon.

Kume however, directed Chief Isiyon to file written application attached with the Federal Court judgment before the court in the next adjourned date

Tribunal adjourned until Oct. 13 the pre-hearing of a petition by Gov. Adegboyega Oyetola, against the declaration of Sen. Ademola Adeleke as governor -elect

Earlier , Counsel to the All Progress Congress (APC), Prof. Lasun Sanusi (SAN) had told the court that his response to pre-hearing had been filed and issues had also been formulated for the tribunal to determine.

Sanusi told the court that counsels of petitioner and respondents had agreed on the time for examination, cross examination and re-examination of witnesses, with a view to ensuring that the hearing is not unnecessarily prolonged.

Also, Counsel to the Independent National Electoral Commission (INEC), Mr Ben Ananaba, said six motions were filed before the court which would be taken on the next date of adjournment when the hearing continues .

Ananaba said that until the motions were taking by the court before a date would be fixed for hearing.

He said the proceeding was still at the pre-hearing stage and believed justice would take its course at the end of the case .

Speaking with journalist Chief Alex Isiyon said “We are here to draw the attention of the court on a judgement delivered last Friday by Federal High Court that voided the candidacy of the petitioner, Adegboyega .

Also, counsel to APC, professor Lasun Sanusi disclosed that the proceeding signified the  commencement of the petition leading to pre – hearing of the matter. This is part of rudiments stage of the petition in election tribunal.

“The tribunal could not begin the hearing of the motion file by parties simply because the other parties said they were just being served and they needed 48hours to respond or react  to the motion. After all these, the tribunal will write processes needed to be followed during hearing stages ,” he stated.

However in the Ruling of oral application by PDP Counsel, the the tribunal ordered for a formal application as regard the judgement of the high court on issues of concerned raised.