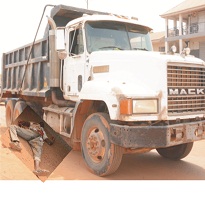 By Michael Ofulue
|
A psychiatric patient was yesterday crushed to death after he allegedly jumped into a moving trailer which killed him on the spot.

Reports said the deceased whose identity was yet to be ascertained, as at press time reportedly went to the  Psychiatric hospital along Oda road in Akure, the state capital, possibly for treatment.

An eyewitness account told The Hope Metro that the unfortunate incident occurred at about 11am  on Wednesday when a man coming out from psychiatric hospital suddenly walked across a moving trailer with number plate Lagos SKK 289 SW.

Our correspondent, who was at the scene of the incident met some policemen from Oda divisional headquarters at Ala quarters, who picked the corps and deposited at the General hospital mortuary.

A competent police officer, who confirmed the story said the man jumped into a moving trailer that resulted into his untimely death.