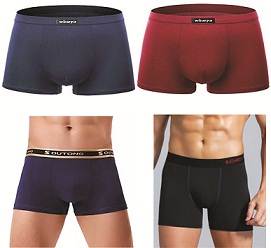 By Kolawole Bamidele
|
Trunks are quickly becoming favourite cut for underwear among men. Why? A trunk cut is a combination of brief and boxer brief without the heap of fabric. In other words, they are boxer briefs with short legs and a square appearance.

The short leg length of men’s trunk make them a great underwear choice when wearing relaxed or even fitted pants.

It allow testicles to be cooler, allowing for more sperm production and increased fertility.

According to a study carried out recently, more than 650 men who wear boxers had seventeen per cent more sperm and a twenty-five-per-cent higher concentration of them than men who prefer tight underwears.

The two showed little difference in the activity, morphology, or genetic integrity of their sperm. But, tellingly, men who wore tight underwears have higher level of follicles stimulating hormone, which is released by the pituitary gland to boost sperm production. It’s an indication that the system is trying to compensate.

With trunks, the legs are shorter and squared off; they look like a pair of tight-fitting shorts or, more from where the name came from, a style of mens square cut bathing suit popular back in the 50’s and 60’s called trunks.