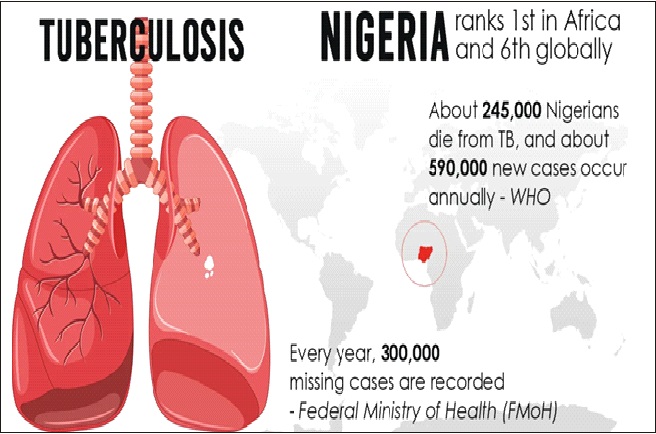 According to the Institute for Health Metrics and Evaluation, Tuberculosis (TB) is the leading killer disease in the world, which claims millions of lives every year.

According to the World Health Organisation’s Global TB report of 2021, which included data from more than 200 countries, approximately 1.5 million people died from Tuberculosis in 2021. This is an increase from the 1.4 million deaths reported in 2019. This, according to WHO, is the first increase in global TB death in more than a decade.

Tuberculosis is the commonest infectious disease in Africa, the West Pacific and Eastern Europe. Globally, Nigeria ranks third, behind India and China, in terms of newly discovered tuberculosis cases. It is estimated that 407, 000 people in Nigeria have TB each year. Around 245,000 Nigerians die from tuberculosis yearly.

According to WHO’s report on TB in Africa, Nigeria ranks 1st and 6th globally among the 30 high burden countries

Several reports have shown that tuberculosis is more prevalent among males than females because of the rate of smoking and drinking of alcohol by the male gender.

According to the US Centre for Disease Control, tuberculosis is caused by germs that are spread from one person to another, and it usually affects the lungs but can also affect other parts of the body, such as the brain, kidneys and the spine.

The CDC further warns that if not promptly treated, an infected person can die of TB. Some of the symptoms of the disease are cough, sneezing, weight loss, general sickness, night sweats, chest pain and coughing up of blood.

With the recent increase in the prevalence of the disease, experts have warned that the disease will continue to increase, as long as smoking, excessive alcohol intake, unhygienic practices remain.

A medical practitioner, Dr Akindurodoye Samuel, said tuberculosis is spread when a person with active tuberculosis in the lungs coughs or sneezes, and someone else inhales the expelled droplets which contain tuberculosis bacteria.

Akindurodoye told The Hope that the disease majorly affects smokers, adding that excessive smoking of cigarette and Indian hemp, and intake of hard drugs and other substances that can damage the lungs also cause TB.

“If anything like smoke should come in, there will be a problem. For example, most of the time if you drink water hurriedly, it is as if it will enter your brain. The problem is that the space for breathing there is a little bit affected.

Akindurodoye further said that when an individual is infected with TB, the bacteria goes straight to the intestines and hide there for four to five months, after which the individual would begin to cough.

He revealed that not every hospital could treat TB, advising that infected people should visit specialist or teaching hospitals, where diagnosis would be conducted by specialists and proper treatment would be administered.

He warned, “to the smokers, their thought is that it goes to their bodies, but it affects their lungs most of the time and when it affects the lungs there will be difficulty in breathing. There will also be weakness all over the body.”

Dr. Akindurodoye added that infected persons may experience loss of appetite and inability to perform daily tasks as expected.

Explaining the treatment process, he said that, “If you go to some specialists and explain yourself to them, even the way you cough most of the time, they take the sample of your saliva in order to confirm if there’s any other thing that is added to it or not. They take the saliva to the lab and test it to know how far it has gone into the body. After it is confirmed, they go for treatment”.

He said most of the time that curing TB may take several months, and in some cases it may take two to three years before the disease can be cured. He said, “Doctors only try, God heals. It takes only God’s intervention to make proper healing take place.”

“For example, Vigras tablet that youths take these days for sex is not for them but for the aged, above 70, who cannot breathe well. When they take it once in a week, they will be able to breathe well. Unfortunately, because of civilization, our youths now take it for sex.

“Ten to 15 minutes after using it, they begin to feel headache, and all the veins in the body will be open. After sex, they go for water because of the effect.

“My advice to youths is that they should stay away from smoking and taking hard drugs, in order to live long.”

“Also, anybody who has tuberculosis, people do not need to run away from them but the only thing to avoid is mouth to mouth breathing,” he recommended.

Another medical doctor, Dr Abosede Adesuyi, highlighted that people who smoke are at risk of contacting tuberculosis due to low immunity. He said, “their immune system is low and this can affect them, not only tuberculosis but every other infection because of the stress of immunity”

Dr Adesuyi said infected people should be taken to tuberculosis center for treatment, get them tested and whatever organism that is cultured out would be treated with antibiotics.

Dr Adesuyi further said tuberculosis is not a sickness that people can treat at home and also drugs cannot be prescribed without a direct therapy.

“People can be prevented from the infection if they avoid a crowded place, feed on balanced diet and good nutrition. When they encounter coughing with bloodstained or mucus, they should run medical tests and see the doctor, while also making use of facemasks,” she advised.

The Medical expert further advised that Nigerians should ensure they take the tuberculosis vaccine called BCG to prevent the infection.

“Tuberculosis infections usually spread among family members who live in the same house. It would be highly unlikely for you to become infected by sitting next to an infected person on, for instance, a bus or cab,” she noted.

Mrs. Adeyemi recommended that the risk of TB infection could be reduced by taking certain precautions, such as good ventilation, as tuberculosis can remain suspended in the air for several hours with no ventilation. Other suggestions by the nurse included covering the mouth and nose when someone coughs or sneezes.