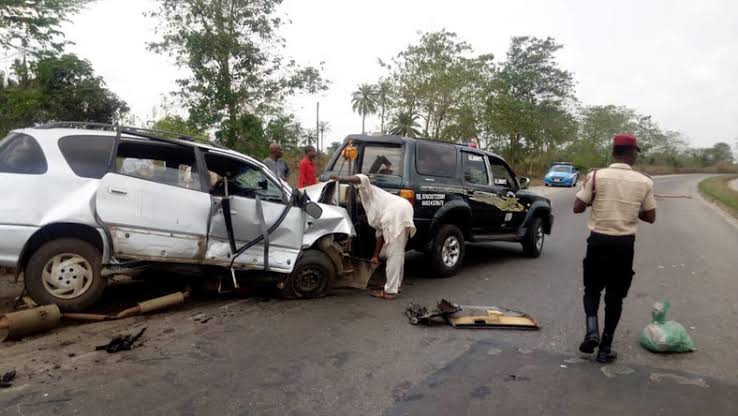 Two persons, whose identities were  unknown, on Thursday lost their lives in a ghastly motor accident  in Ado-Ekiti, the capital of Ekiti State.

The accident which occurred under the flyover located between Okesa and Fajuyi pavilion park involved one commercial motorcycle and a Toyota Camry.

The driver of theToyota Camry was said to be coming from Okesa axis of the town and heading towards Fajuyi park in an awkward position when the commercial motorcyclist driving from other axis suddenly rammed into the car.

He said a Toyota Camry car had at that spot rammed into a commercial motorcycle and overran it ,  leading to the death of the passengers on the bike.

Abutu disclosed that the passenger died on the spot, while the motorcyclist died while receiving medical treatment  at the Accident and Emergency section of the Ekiti State University Teaching Hospital (EKSUTH).

“The vehicle overran the two of them and they lost their lives. However, the corpses had been deposited in the EKSUTH’s morgues .

“We are still investigating the cause of the accident and we charge road users to always exercise caution and watch their actions while driving or riding on highways” he state.

The police image maker added that the ill-fated Toyota Camry had been towed to the Okesa Divisional police station  in Ado-Ekiti, while investigation has begun on the cause of the accident.