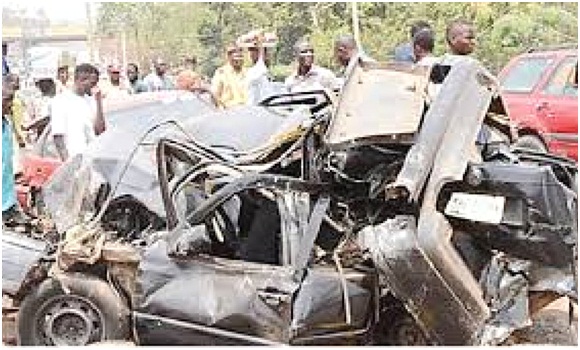 Two persons have been confirmed died in a ghastly accident on Ipetu-Ijesa/ Ilesa expressway in Osun state on Sunday.
The Federal Road Safety Corps, FRSC, Osun State Command spokesperson, Mrs Agnes Ogungbemi, in a statement said 16 persons, 14 males and two females were involved in the accident.
Ogungbemi said that the accident occurred at 12:10 pm, involving a Ash Mazda car with number plate KNE181XA and a white Toyota Hiace vehicle with number plate JJJ465 EF.
She said that a Tecno T485 phone, identity card, two debit cards, OPPO mobile phone and N10,015 were recovered from the accident scene.
Ogungbemi said that all the injured victims and the two dead bodies were taken to Wesley Hospital Ilesa by the FRSC patrol team.
According to her, the accident was due to dangerous driving by the drivers.
She urged motorists to always obey the road traffic rules to avoid accident that could lead to loss of lives and property.
Ogungbemi, however, said that normalcy had been restored to the area for free flow of traffic.