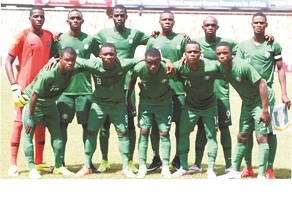 By Femi Atolagbe
|
Nigeria’s Golden Eaglets will trade tackles with their U-17 counterparts from Australia for their last Group B final match today in the on-going U-17 World Cup holding in Brazil.

The Eaglets, who sit comfortably at the top of Group B with six maximum points from their two previous games, are among the first three teams to qualify for the next round of the tournament.

The two other qualified teams are Angola and the host, Brazil.

The Australian team however have failed to find their feet in the tournament, failing to win any of their two previous matches against Ecuador and Hungary.

In their first match, the team lost 2-1 to Ecuador and settled for a 2-2 draw against Hungary.

Australia will need a win against Nigeria and hope that the match between Hungary and Ecuador ends in a draw in order to have any chance of qualifying for the next round.

The match between Nigeria and Australia will be played at 9pm Nigerian time today.