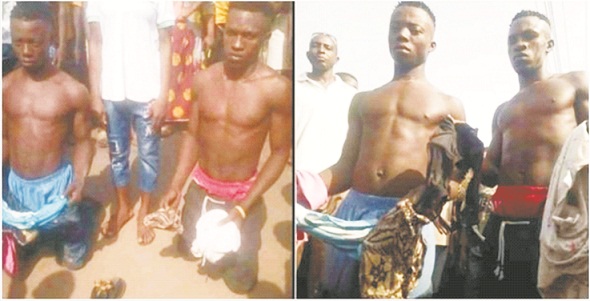 By Maria Famakinwa
|
The fear of ritualists otherwise known as “yahoo plus” is now the beginning of wisdom for ladies and young women across the country as the reports of the apprehension of suspects going about stealing female pants, bra and used sanitary pads has become a daily occurrence.

The ugly trend is already creating palpable fear and generating serious concerns with many calling for immediate step to nip it in the bud. Recently in Akure, two security guards identified as Samuel Linus and Adekunle Ogundana were alleged to have stolen underwears belonging to the daughter of a pastor. Another elderly man identified as Kayode Michael was caught with a bag containing female pants, bra and used sanitary pads at Danjuma area in Akure.

Likewise, another man who claimed to be a pastor was caught with a bag full of female pants and bra in Edo State after he was accosted by vigilante group who suspected him.  It was the same story in Osogbo, Osun state capital where a 23-year-old Opeyemi Adeleke was caught stealing pants belonging to one Gift Sunday at midnight. Most ladies in some states were reported not to be wearing pants for fear of yahoo plus boys. Unconfirmed reports also had it that some yahoo boys forced ladies to remove their pants at gun point in Delta State. The evil being perpetrated by yahoo boys due to  getrich -quick-syndrome is endless as findings show that they can use anyone including their relatives for money ritual if the situation demands it.

The Hope spoke with some Akure residents on the safety measures they are applying  to protect their undies.  A trader, Mrs Annu Omowanle who expressed shocked and sadness at the development described it as a sign of a failed nation and called on parents to be alive to their responsibilities. “This development came as a rude shock to me and I find it hard to believe that our youths who should be focused now, to be useful in the future are the one running after money. This is telling you that the future of this country is doubtful.

“Can you imagine teenagers who should concentrate on their studies thinking about how to ride latest jeep that most of their parents don’t have. That is why I am calling on parents to get more involved in their children activities especially the company they keep. Most higher institution students today are into cultism and their parents did not know until some of them were killed. The truth is that any yahoo boy must surely belongs to a cult. I just pray that God will deliver this present generation from evil..”

On how she keep her undies said that she now wash them at night and spread them in the bathroom till the following morning when it will dry. “My female children also use the same style. That is what the situation demands for now. “

Sharing similar sentiment,  a teacher Mrs Atinuke Ilesanmi, warned against spreading female undies outside if the owner will not be around to guide them. “Going by different news on how female undies are being hunt for by yahoo boys for money rituals, I think it is better not to spread one’s undies out when one is not around. There was a time my neighbour forgot her undies outside, I called her immediately to come and keep it in. This is a serious issue that the government should not joke with because. I read that some ladies are going about pantless because of fear of yahoo boys.

“This will only worsen the situation because it will increase incident of rape. Let the government take a drastic steps to address this on time.  If some of the yahoo boys caught were made to face the wrath of the law, it will serve as warning to others.  The saying that our youths are our tomorrow can only come to be with youths who have visions. Not youth who want to become millionaire overnight.  No wonder they are described as being lazy because is only a lazy youth who will be looking for an easy way out.

“Another news l heard that was nauseating to me was that some of these yahoo boys consumed faces with bread because they wanted to be rich. They better be told that anything one did not sweat for will never last and when the repercussion of this ugly act will come, they will be worst for it. My advice is that our ladies should not spread their undies outside including their towel when they are not around. For me, anytime I spread my undies outside, I make sure I sat close to it because it is hygienic to dry undies by sun and took them inside.”

A female undergraduate,  Miss Romoke Taiwo revealed that most of her friends no longer spread their undies outside and that instead of disposing their old undies, they now burn them to ashes as a way of protecting themselves as she added that they cannot trust the boys in the campus.

“Since the increase rate of reported pants theft, my mother had been calling to warn me against handling my undies carelessly. Some parents visited their female children in schools because of it, while some female students relocated to places they felt were more secured. Pants theft is the trending issue presently  and should not be talk down. The problem should be on the society that celebrates the rich without questioning the sources of their wealth. So, many also like to be celebrated and accorded undeserved respect which was the reason they opted for the fastest means.”

When asked if some ladies are truly going pantless to protect themselves  she answered that she did not know but she was aware that most ladies now ran away from Yahoo boys and they do not spread their clothes outside. “Ladies no longer spread their clothes outside talk less of undies. Even their slippers and shoes are always kept inside. Ladies are taking precautions not to be victims of yahoo boys, due to this, we suspect most guys on the campus.  Before now, different cars came to the campus to pick ladies for weekend, but now, things have changed, nobody want to be used for ritual purposes again. “

A student of Federal University of Technology Akure (FUTA) who simply gave her name as Bisi said that the only way one may not become victim of yahoo boys is to be contented with what you have and not to imitate anybody.”Both yahoo boys and ladies who fall victims of their tricks are culpable, that is why is advisable to be satisfied with what you have. That they are using ladies for money rituals is not just starting today, yet many did not learn.

“On the new trend of pants theft, I will urged ladies not to spread their undies outside and they should burn into ashes any undies they are not using again because most of yahoo boys now go to refuse site to search for undies. It is equally advisable not to keep late night or go out with friends you do not trust  to be on the safer side.”