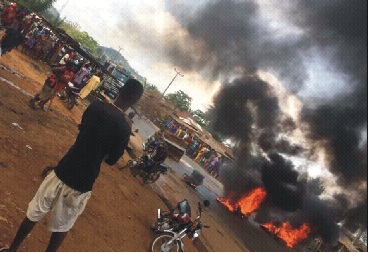 It was a black Sunday for the people of Owena, a border town between Ondo and Osun States, as three persons were killed in two separate accidents that occured yesterday.

The Hope Metro gathered that, in the morning, a trailer crushed three women and killed one instantly while they were buying goods at Owena-Ijesha market.

One of the two injured women who was rushed to the hospital, was later confirmed dead.

As at the time of filing this report, the third person was receiving medical attention at an undisclosed hospital.

Hours after the accident, calamity struck again at Owena-Owode in Ondo State, when another trailer crushed an undergraduate student, simply identified as Toheeb, while returning from the market.

The accident occured at the front of Swift Oil filling station.

One of the eye witnesses said Toheeb was trying to overtake the truck when the handle of the empty gallon of palm oil he tied hung with the truck.

“He was on a bike with his kegs. He had sold the keg and was returning home.

“As he overtook the trailer, one of the kegs hooked the trailer and he fell under the trailer that crushed him,” the eye witness said.

He added that he was from Erigi village.

His unfortunate death and that of the women earlier, led to the youths of Owode burning tyres on the road to preventing any vehicular movement.

Security agents were later deployed to the area to maintain peace.