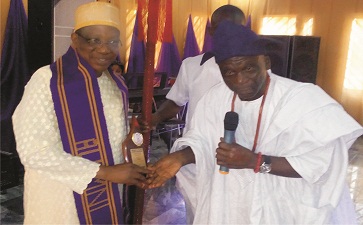 The  personalities were honoured  during the alumni dinner held at the International training hall of the Federal College of Agriculture, Akure, Ondo state.

The state Chairman of the Association, Otunba Dr. Olanrewaju Adesanya, who spoke with The Hope  Metro said the association  honoured its members who have excelled in their  various chosen careers.

Adesanya said all the awardees have at one stage or another served their  communities state and the country in general, which motivated the association to appreciate them, saying  the dinner was to celebrate the lives of all members and  appreciate God .

According to him, the alumni had presented a one thousand capacity lecture theater for the students, while some projects are  ongoing within the university. This he explained was  a way of assisting the federal government in the development of education.

“Recently, 6,000 volume of books were delivered to the university authority as contribution of alumni to develop the university,” he said.

Chairman of the occasion, who doubled as the resource person, Justice Sunday Olorundahunsi, in his welcome address observed that the dinner was aimed  at bringing  the alumni together to reunite and socialise.

The Olowo of Owo, Oba David Folagbade Olateru Olagbegi charged government to address the issue of insecurity across the country.

Olagbegi , who observed that government was not doing enough to fund education appropriately,  called on alumni of all universities to go back to their citadel of learning  to lend  a helping hand to raise the standard of the school to the level of the private ones which students are running to.

The State commissioner for Health, Dr. Abdul Wahaab Adegbenro, reacting to the honour, expressed satisfaction and appreciated the association for counting him worthy.

The State commissioner for Works and Infrastructure, Alhaji Taofik Olawale Abdul Salam,  who spoke with The Hope Metro appreciated the military on their  effort in visiting some harmlets around Auga, calling on other security operatives to emulate the military by visiting such places around and across the state.