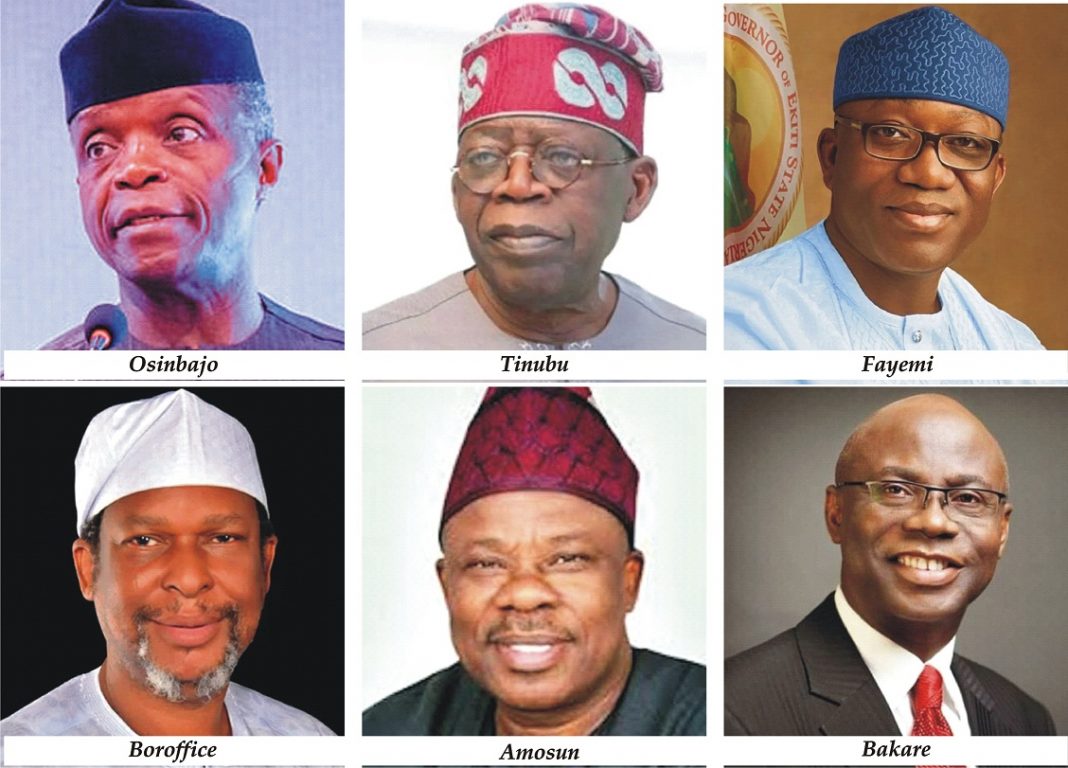 Unless aspirants from the Southern part of Nigeria take a cue from Aminu Tambuwa’s step down move for Abubakar Atiku of the Peoples Democratic Party (PDP), the All Progressives Congress, APC Presidential candidate may emerge from the Northern part of the country.

This is the submission of notable Yoruba leaders who spoke with The Hope in separate interviews as the APC prepares for its presidential primary next Monday.

They said the failure of aspirants of Yoruba extraction to present a single aspirant to contest for the presidential ticket of the All Progressives Congress (APC) may end up hurting the region’s chances of winning the ticket.

Recall Aminu Tambuwal, a PDP presidential aspirant at the last minute, collapsed his structure for the former Vice President and now presidential candidate of the PDP, Alhaji Abubakar Atiku during the party’s convention for Atiku to emerge as the party’s presidential flag bearer.

Chief Segun Adegoke said the problem is that we practise a different politics from the politics of the northerners.

He added that “now we have so many Yoruba aspirants contesting to be the presidential candidate of the APC. With this situation, the northerners may end up winning the ticket.

“If they can all come together and present one aspirant for the election and the aspirant is not elected, then we will know that they don’t want us to be there. As it is right now, who will blame the northerners if at the end of the day, Yoruba aspirants’ votes are divided and we become the loser?”

Basorun Seinde Arogbofa said there is the need for APC presidential aspirants of southern Nigeria to embark on dialogue to have their way.

He hinted that the Afenifere under the directive of Pa. Reuben Fasoranti had a plan of inviting all Yoruba presidential aspirants from all political parties for a meeting which was later shelved as Chief Bisi Akande and Akinrogun Osoba had waded into the matter

He, however, expressed displeasure at the political developments currently being experienced in the country as the presidential election draws near.

In the same vein, the Afenifere Chieftain called for the restructuring of Nigeria which would make each state of the country to be independent.

He believed that with this arrangement, each state will take care of itself and the mad race for the presidency at the centre will reduce.

The President, Ekiti Council of Elders, Prof Joseph Oluwasanmi, said in order for the people from the southern extraction to achieve their desired to become the next President of Nigeria, all delegates including the aspirants in the forthcoming primary election of the All Progressive Congress (APC) should team up by providing one person to fly the flag of the party.

The Octogenarian admonished the southern delegates and leaders of the APC to form a common ground in the interest of peace and the yearning agenda of the southern parts of the country.

“I must at this juncture draw the attention of the southern delegates to the attitude of the Governor of Sokoto State who at the last minutes of the presidential PDP primary withdrew his intention and instructed his followers including delegates from the northern parts to vote for Atiku Abubakar who was later declared winner of the primary election.

Similarly, the National President, Agbajowo Advocacy for Yoruba People’s Right (AAYPR) Mr Muyideen Olamoyegun, admonished all the aspirants from the southern part to form one accord and come up with a person to fly the flag of the party.

He particularly mentioned the Governor of Ekiti State, Dr Kayode Fayemi and the Vice President Yemi Osibajo as well as the former Governor of Lagos State, Asiwaju Bola Tinubu to come to a round table and produce what he called formidable candidate who fly the flag of the zone.

“It is right time for the Yorubas to be united and form a common ground, the move would enable us achieve our common goal, we cannot afford to loose the slot to the northern parts, the PDP has picked their candidate from the north.

A Chieftain of All Progressives Party, APC in Ondo State, Prince Olu Adegboro said he was highly disappointed that such large number of presidential aspirants come from the South, particularly the South-West to contest for the position of the President.

He called on the chairman, South-West Governors’ Forum and Ondo State Governor, Oluwarotimi Akeredolu, to summon an emergency meeting of all aspirants in the region.

He said the meeting which should have his brother governors, leaders and relevant stakeholders from the region in attendance, should prevail on all aspirants and let them realize the need to step down for one another.

He believes that the region cannot afford to lose out from the present political calculation.

Chairman, Anti-Doping Agency of Nigeria, Mr Olanrewaju Kazeem called on the aspirants and the delegates to learn from their counterparts from the north who did not only support their brother but also ensured he emerged in the PDP.

Kazeem who said it is only the return of power to the south that will ensure equity and fairness in the political landscape in Nigeria wants the people of the Southwest not to go against their own.

According to him, if Tambuwal could step down for Atiku, then there is no reason why the people of the Southwest could not emulate him and the northern delegates.”

Former Chairman of the Social Democratic Party (SDP) in Ondo state, Chief Korede Duyile cautioned the South to be wary of the North so that the South will not lose out from the ongoing contest.

He said the Fulanis will always want to install one of their own to protect their interest or cause problem that will heat up the polity.

According to him, if the North wants to play their politics they can field somebody in the South who they know can never win election just to have another northerner as President in 2023.