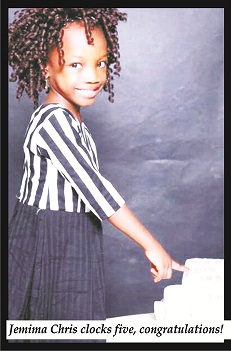 By Kemi Olatunde
|
Ibukun’s parents encouraged the friendship between their daughter and her friends. On her birthday, her friends threw a surprise party.

The birthday started, Ibukun was very happy as she couldn`t believe her eyes. The party was one in a million, everybody got food to eat and there was even left over.

When Ibukun got to Jss3, she started keeping bad companies, she and her friends became enemies. She had 2 new friends namely Dami and Nike they were neither Christians, Muslims, traditionalist nor Hindus. On Sunday, they stayed at home, on Friday they were also at home. Ibukun`s parents didn`t support their friendship so they kept low. Ibukun began to go to club and stopped reading. One day, Nike and Dami,  introduced her to prostitution. The day Ibukun went to the club, a man called Ibukun and requested that she worked for him but Ibukun couldn`t understand. She consulted her friends who told her to agree to the man`s request.

She left with the man without returning home. She became a money ritual victim. Her parents looked everywhere for her but she was nowhere to be found. One of their friends suggested that they declare her missing and whoever knows her whereabouts would be given a very good reward. Children should always obey their parents. Do you know the stress Ibukun’s parents went through? The body of Ibukun was later found along a road in another state.         Concluded

ONCE UPON A TIME

Once upon a time

Was my best friend

Of the choir of insects

That she is the carrier

Was the next friend I had

But when I had the information

That he was a dangerous reptile

I abandoned him outright.

Was another good friend of mine

When I was very young

Later, my mother told me

That he was the distributor

I shut my door against him.

The goat was once,

But when I noticed that she was very stubborn

My friendship with her

Come to an end abruptly.

Was directed to the Parrot,

A bird who behaves,

He reports all events to me

At the end of each day.

A red beak to match

And a handsome tail to behold,

Will remain my best friend,

As long as I continue to live

On the surface of the earth.