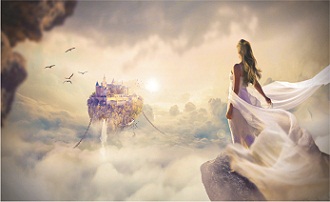 .Aditi Raman Shridhar
|
Ever since the birth of mankind, there have been rules, customs, rituals, code of ethics and theories of several kinds about how a human being must be like. In the hunter-gatherer stage, the human species had devised tools to hunt animals and strategies on how to protect themselves from the wild. With time as they learnt the power of unity, they devised the concept of tribes. They then set rules on sharing food, protecting each other and their young as a means to survive better. Gradually as they evolved in emotional faculties as well, they devised the concept of families and created rules there too to ensure a peaceful living.

Millenniums later, when the world population stands at a whopping seven billion today, it is not surprising to see the countless bordered countries, religious cults, political governments and economic establishments. The rules among the species have also become more complex now. False beliefs are propagated around ‘money’ and pressure created on ‘being good human beings’ through story books, religion and education in order to keep the commoners, poor and the rich, richer. The rules are set by those who run the world by sitting on various helms of power, but interestingly, none of their own rules apply to them.

Robert Kiosaki, author of Rich Dad Poor Dad, speaks on detail on his Youtube channel, about how the governments and religious organizations work in nexus and sell various concepts and mindsets to children through education, subtly pushing them to choose limited careers. In the entire 12 years of schooling, money and finances is not taught even as a chapter to the youngsters in any part of world, when in reality, the only way to survive in the current world is by wealth. By the time kids graduate from colleges, they are only technically equipped to serve in companies and earn a living for themselves through hard work, whereas billionaire business owners only extract the potential from the so-called ‘qualified’ kids and live ultra-luxurious lives. The complexity of the psychological warfare and battle for power among the human species can be gauged simply by the fact that youngsters are not imparted the vision of doing extraordinary things, thanks to a carefully designed education system that is meant to keep them craving employment to fulfill another man’s dream. This is further cemented by nearly all religious doctrines in the world – that call ‘too much money’ a sin and the desire for wealth a direct assault on the inner moral goodness of a human being.

Thanks to evolution, someday the entire human species will grow out of these falsehoods as well; in fact the change has already begun. People all over the world have started questioning the idiotic divisions amongst human kinds on ‘race’, ‘colour’, ‘caste’, ‘wealth’, ‘languages’ and all other possible forms that the species has devised to thrive. Youngsters, more than ever, are keen to find out how the very human mechanism works. Once only an entitlement of the monks and saints, the pursuit of discovering true human potential and the limitlessness of human spirit is now a reality for the average college-goer too. The world realizes now, as a majority, that there is an inner intelligence in all of us which transcends beyond the physical. And the journey within to explore this hidden intelligence is truly the single-most mystical, enchanting, thrilling and desirable pursuit to undertake in one’s life.

This unseen and unfathomable brilliance of the human mind and spirit, which none of us knows comes from where or whom (which is why we created a term ‘God), can simply be gauged from the fact that as a species we have come very far in evolution, surpassing all other evolutions on this planet and are capable of creating absolutely anything that we can imagine. We created music and instruments, dance and its various forms, painting and writing, rules of grammar and infinite languages, coined names for every country, city, street, rivers and waterfalls, created sports and games, devised money as the most sophisticated form of barter system, created a share market, started automobiles and today send rockets and satellites in space. We the human species created movies and the world of sci-fi and animation, we created law, constitutions for countries, share markets and businesses. We have digital platforms now and we sight aliens. To top it all, we study everything in this universe and imitate everything. From artificial rains in Dubai to human robots, this millennium is now witnessing artificial intelligence.

Unlike any other life form on Earth, which has a base line and upper line of reproducing, eating and surviving and dying, we humans have no upper limit. We have had saints who levitate and take Samadhi (voluntary death by controlling the passage of soul from body). There is no guidebook on how to be a human or any knowledge of what the last stage of our evolution looks like. We do not know till where our inner brilliance goes, yet each one of the seven billion human beings on Earth desire to be more. The truth is that whether it is by intoxication through alcohol or prayers in the church, by creating businesses in the world or happy relationships in your life, by charity to other people or by killing people in rage, every human being is only craving the same desire it is born with – the desire of expansion. We all want to be more than what we are right now and since none of us really know what the exact right path for this expansion is, we adopt all kinds of ways that we think is right. This is exactly why laws and moral codes were created – to prevent assaults and violence of any kind of a human being by another. There are no such ethics and laws in the animal kingdom.

The last cherry on the cake in my column today is that every individual human being that has ever existed on this earth; that is living right now, and that which will ever be born in future is unique. Your DNA, your fingerprint, your brain chemistry and wiring, your mind and soul is unique. There hasn’t existed, exists or ever will exist another of your kind. It is biologically impossible. You, my friend, are the only one of a kind ever to exist in the entire lifetime of this universe. Isn’t it now a reason enough to discover yourself and unleash every pore of brilliance that you possess within you?

There is no rulebook and no guidebook on how to do this, except that you sit in silence today and go within. Discover who you really are, find what you can really do and to what limits you can push yourselves to. May we all in this New Year, pledge to ourselves to unleash the unique brilliance that we have within and enhance our lives beyond what we ever imagined.