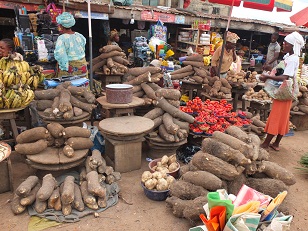 By Fatimah Muraina
|
Ondo State Government has been urged to upgrade the first tomatoes market at Iloro community to a beffitting modernised market.

The woman leader of the market, Mrs Bukola Bamidele made the call in an interview with The Hope in Akure.

She said the market has been in existence for a very long time which has led to the establishment of two big tomatoes markets.

Her words: ” Iloro market is an ancuent market which brought about the establishment of the Shasha tomatoes market along Owo road and the ones along Ondo roads”.

According to her, traders have been the ones making repairs of their shops which they dismantled to develop their new shops at other markets where they are allotted shops or place to market their products

This, according to her has made the shops and environment of Iloro market very unconducive.

She pleaded with  government to come to their aid to restructure the market to a modern one like the neighborhood markets with modern facilities like having the lock up shops and accessible roads to make it more attractive to both traders and their customers.

She said customers still patronise them saying that the market was not restricted to selling of tomatoes.

“Many other traders sell different kinds of products like ingredients and other food stuffs such that a customer can get whatever household item needed rather than going for them in another market”, he noted.