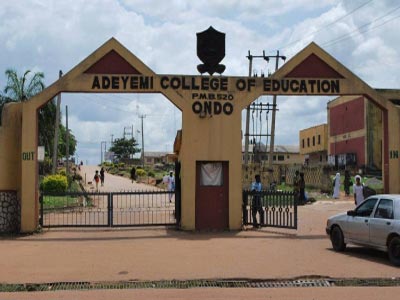 By Sade Adewale
|
The United State Agency For International Development (USAID),  is planning to provide technical assistance to Adeyemi College of Education, Ondo.

The assistance will involve provision of technical support to staff and students  with the objectives of building their capacity and  enhancing their  efficiency.

The West Africa Regional Director of WINROCK International  Mr Mike Bassey dropped the hint at a meeting  he held with the Principal officers of the College, and senior academic staff from the institution’s School of Vocational and Technical Education at the College Council Chamber in Ondo.

Bassey who serves as intermediary between the global body and beneficiary organizations, gave background information on the Farmer- to- Farmer (F2F) initiative.

According to him, “the Farmer-to- Farmer ( F2F) programme funded by the United States Agency for International Development ( USAID), provides volunteers technical assistance to farmers, agribusinesses,  education and extension providers in developing countries, to promote sustainable improvement in the agricultural sector.

“The F2F programme was introduced with the aim of generating sustainable, broad- based economic growth in the agricultural sector.”

While giving details of his organisation’s contributions to agricultural development in no fewer than 58 countries in West Africa, which include Ghana, Guinea, Liberia, Mali, Nigeria and Senegal, Bassey stated that through the contacts made to USAID, the organization was able to leverage on expertise of skill volunteers provided by the former “to strengthen agricultural institutions in West Africa including countries earlier mentioned, here over 5,400 assignments have been completed.

On the mode of operation of the volunteer initiative, Bassey stated that participants of the scheme would focus attention towards addressing critical needs such as reduction of poverty, provision of essential services and technologies

Speaking on what Adeyemi College stands to benefit, he assured the College Management that the institution would be assisted in capacity building of its staff and students.

He expressed satisfaction with the level of development in the College and noted that its students population would serve as an added advantage, when the programme takes off in the institution.

Responding, the Provost of the College, Dr. Samuel Akintunde expressed appreciation to USAID and representative of WINROCK international, Mr Mike Bassey for giving consideration to the College as one of the prospective beneficiaries of the programme.

While soliciting for additional support in various areas in the institution, the College Administrator said the move would assist in taking the institution to a higher level.

Also speaking Mr Ganiyu Abdul thanked the USAID and other supportive organisations for the gesture and assured that the opportunity given to the college would be used judiciously.

Similarly, while giving her speech, the Director, Directorate of Linkages and Sponsored Research in the College, Dr. Itunu Awosika, thanked Mr. Mike Bassey and his organisation for their contributions to the  process leading to the College being considered as one of the beneficiaries of the USAID programme.